An era of youth hockey to the Coachella Valley is a welcomed one. In their first home game, the Cal Desert Rams hit the ice facing Servite High School of Anaheim. 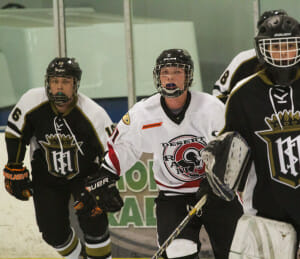 A nine school collective, the Cal Desert Rams are part of the Anaheim Ducks High School Hockey League (ADHSHL). In its inaugural year the ADHSHL started July 1, 2008 with only a few teams.  CHECK OUT THE QUICK VIDEO OF THE DAY[2]!!

Fast forward to 2014 and the ADHSHL currently boasts 41 teams in five divisions.

The first home game wasn’t one to disappoint. After a slow start (0-3) the Rams found their legs and got to work 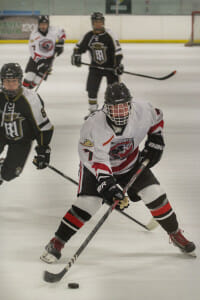 With 7 minutes left in the third the Rams found the equalizer tying the game 5-5 only to give up a quick goal to Servite a few seconds later.

At 5:43 the Rams had a hopeful power play opportunity but came up empty. The boys played hard, nearly tying the game short handed with 1:30 remaining but ended up falling 6-5.

Saturdays game was a smashing success played in front of nearly a hundred fans. If you’re looking for a free, fun for the whole family activity, head down to the Desert Ice Castle and support our local Cal Desert Rams!!