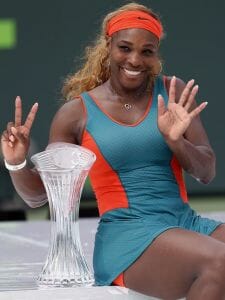 Williams, a two-time Champion at the BNP Paribas Open (1999, 2001), has captured 19 Grand Slam singles titles in her career, including the 2015 Australian Open.

“We are thrilled that Serena Williams, one of the greatest women players in the history of the game, is returning to play in the BNP Paribas Open,” said Moore. “We know our fans will welcome her for the magnificent champion that she is, and we really look forward to watching her compete again at the Indian Wells Tennis Garden.”

In addition, Williams announced she is offering fans an opportunity to be her guest at the BNP Paribas Open. Fans who donate $10 or more to Equal Justice Initiative (EJI), an organization that provides legal representation to individuals who have been denied fair and just treatment in the legal system, will be entered in a drawing to win a trip to Indian Wells and sit courtside during her first match, have the opportunity to return one of her serves during a practice session, and take home one of her racquets. For details and other experiences being offered, and to enter, visit https://www.omaze.com/experiences/Serena-Williams.