In 2010, Bill Haas won his first PGA Tour event at the then-Bob Hope Classic. His father, Jay Haas, had just finished play at the Mitsubishi Championship on the Champions Tour. The elder Haas caught a late-night shuttle to the mainland and arrived in time to watch his son put the finishing touches on a one-stroke victory over three golfers, including Matt Kuchar. 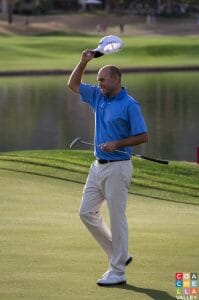 Fast forward to 2015 and the script nearly repeated itself. This time, the now-veteran Haas, with six PGA Tour titles, made a late run to win the Humana Challenge by a stroke over a quintet of runners-up, including twice-bitten Matt Kuchar. Haas, a Wake Forest product, might become known as the “Desert Deacon” if he continues to demonstrate an affinity for tournaments played under the western sun. 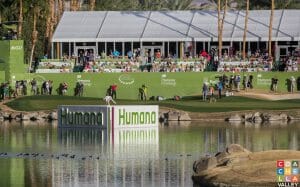 Much like death and taxes, low scores in Palm Springs are never in doubt. One could assemble a 250-stroke ringer score of daily low rounds (63-61-63 -63) for this year’s event. Any score in the 70s is usually a ticket to the missed-cut express, although Charley Hoffman bounced back just fine this year from an opening 71, nearly catching Haas with rounds of 63-67-64. Brendan Steele has a final-round 64 to tie Hoffman, Sung Joon Park, Steve Wheatcroft and Kuchar for second place. 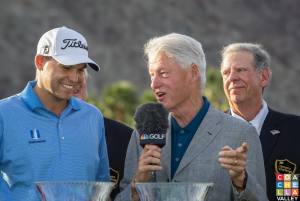 Bill Haas posted a 5-under 67 to trail the Thursday leader by four. After a slow Friday start, the South Carolina native birdied nine of his final 11 holes to make up ground on Matt Kuchar, who had played flawlessly (65-64) over the course of two rounds. For the second time this season, Kuchar was unable to carry a halfway lead to victory, although he certainly gave it his best, closing with a 67 after a nondescript 71 on Saturday.

In fact, few golfers had much success during Round 3. Only Shawn Stefani went low (63) and he was in dire need of that score to simply make the third-round cut. Haas put the blame for the banal rounds squarely on the shoulders of Mother Nature.

“I think the weather today, the weather, I mean, it’s perfect out there, but there is definitely some wind,” Haas said. “I don’t think it takes much wind here in the desert to really affect the way the golf course plays … So, it made me hit a few bad shots that made me then play safe and I couldn’t get aggressive on some of the holes.”

After three rounds, Haas, first-round leader Michael Putnam, tour rookie Justin Thomas and 2014 U.S. Open runner-up Erik Compton were tied for the lead at 17-under. Putnam opened play with a double-bogey on Sunday’s first hole, made another on the back nine and dropped 14 spots into a tie for 15th. Compton fared little better in Round 4. After making 18 birdies over the first three days, the Florida native mustered a meager three birdies on Sunday, dropping to a tie for 10th.

Budding phenom Justin Thomas, 21, produced six birdies over the final 18 holes, but was undone by inexperience. A bogey and a double sullied his card and he finished two strokes behind the leader, in a tie for seventh.

Bill Haas did what veteran champions do. He weathered another slow start (over par after three holes) with a counter-offensive that featured a birdie-par-eagle-par-birdie stretch from holes four to eight. Haas avoided trouble on the back nine, posting an efficient 34 with two birdies. 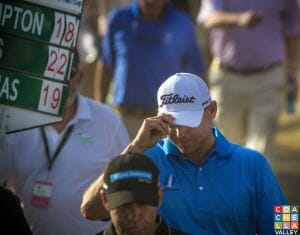 All that can be said for the runners-up is that they ran out of real estate. Hoffman birdied five of his final six; Steele and Wheatcroft, their last two. Park ran off five birdies in his final eight holes, while Kuchar birdied No. 17 but could not find one, sub-par hole.

Last spring at Hilton Head, Haas took a tumble down some stairs and came up wounded.

“I fractured my wrist last year, not to the point where I couldn’t play,” Haas said. “I played on it, and doctor’s orders were if you want it to heal, you need to not play. So basically for three months I played a few outings and that was it. I didn’t practice, I didn’t grind it out, just because I was trying to get healthy. So, when I came out here, last Wednesday, I literally was knocking rust off, like we say.”

Given the uncertainty about the wrist and the lack of competitive conditioning, it’s a wonder the two-time tournament champion entered the discussion. File this one under “horses for courses” and let’s move on to Scottsdale and the Waste Management Phoenix Open.