DHS looks to be the location for the largest single Mid-Century design,  new home development ever announced in the valley.  Vista Palms will be comprised of 95 Mid-Century homes in a gated community according to Chris Canady, owner 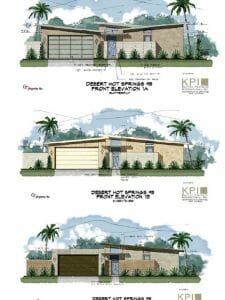 [1]of CT Properties, Inc.  Plans are already before the city’s planning commission for design approval. Vista Palms is to be located off Hacienda on the east side of Palm Drive where the developer had purchased the property some time ago.

In the same way that Miami Beach became the architectural icon to Art Deco architecture, the Mid-Century stamp would seem to be the Coachella Valley’s claim to fame.  Most people already see the valley as the Mid-Century paradise, and this will only help people remember the 1950’s and all the movie stars that made this part of the desert so famous.

For those who don’t already know, old movie contracts stated that movie stars under contract had to live within two hours of the studio, and the greater Palm Springs area including the entire DHS area was exactly that place from which you could get back to work in time by car.

Right now, with newer home prices easily exceeding 400k in Palm Springs proper, a new home in the 300K price range will be a welcome choice for buyers looking to move to the desert area at a more reasonable price point market studies show.  This is exciting news for DHS that has much needed to attract investors beyond the very hot market in PS.

In fact, when looked at across the north end of the valley, two developments serve as bookends to what could be a newer future for the high desert. About 4 miles to the west of downtown DHS, Skyborne was built just prior to the last economic downturn by the nation’s largest homebuilder (at the time) DR Horton.  It too is a newer home development and private gated community just off Pierson road at Highway 62 along the most common route to Joshua Tree. Talk is that developers are looking to finish off lots that are still available there under that master planned community’s original plan. Variations on that are also currently being discussed. 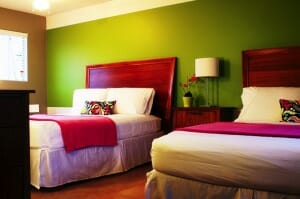 [2]So from Skyborne to Sky Valley, DHS is starting to show that it can reach for the stars.

Yesterday, I was lucky enough to attend the ribbon cutting ceremony at Vista Ventana, a fabulous new resort recently renovated by the owner of the Monroe in Palm Springs.  He too spent some time with me discussing the things DHS still needs to accomplish to get more large scale investors to a city that he sees  as attractive as its sister city and neighbor Palm Springs.  Properly placed investments, and those willing to put serious renovation money into older resorts are exactly the ticket to a newer fresher bolder DHS.

I never tire of hearing of the curative powers of the hot springs that give DHS its name, and its differential quality within the valley as The Spa City. That is a quality that only DHS can market, and everyone is happy to see these new business leaders come to the area to help the city realize its potential. Bravo.