The Beauty of Nepal at the Date Festival

Namaste all the Way!

While checking out all of the vendors and their booths at the current Riverside County National Date Festival, one in particular caught our eye.  On the back row of the Fullenwider Building, about halfway down the aisle, against the back wall, is an explosion of color from Nepal.

Buddha’s Gift Handcrafts and Clothing from the Himalayas is a business owned by Lotte Lama.  Lotte is actually from Nepal, and he has brought a hand-picked selection of handcrafted goodness straight here to the United States.  Lotte lives near San Diego, California and says his first trip to the Coachella Valley was the Tamale Festival in Indio back in December of 2015.  “I sold some things there and someone told me I should come to this festival…”  He then asked us how long the Date Festival has been going on.  I told him this our 70th, and it has been going on since 1947.  He gasped in disbelief.  I told him, “You are now a part of something that is known worldwide, and it certainly is a pleasure to see you here – as I do not believe I have seen anything like what you have to offer here in my lifetime!”

As I looked around his booth, the sides and back are draped with glorious handmade tapestries depicting Shiva and other Nepalese and Tibetan treasures.  There are also colorful Tibetan prayer flags.  The clothing is all traditional Himalaya-style tunics, wraps and loose, desert-friendly clothing (which is thoughtful of Lama since the region he comes from is typically very cold).  A display table is packed with singing bowls, yoga bells, and other instruments from Nepal, statues and jewelry.  There are also handmade signs and some books for the reading enthusiast.  Rounding off his wares are meditation CDs.

Lama said he came to the United States to share his culture.  In doing so, it appears he has found much joy.  His face is aglow with happiness and gratitude, something the world needs much more of for sure!  Lotte Lama was recently able to bring the remainder of his family to the San Diego area from Nepal.

He seems very interested in the many display and sales opportunities here in the Coachella Valley.  Keep your eyes open for this kind man and his wonderful, colorful booth, as you will probably see it more often as he begins to learn more about our awesome valley.

Lotte Lama can be found on Facebook at: Lotte Lama Buddha’s Gift 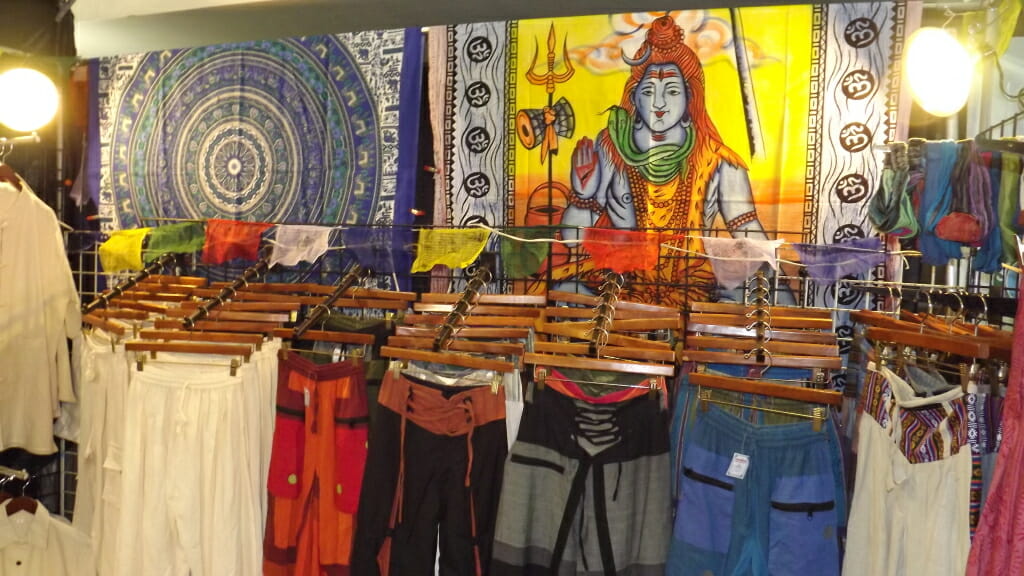 Handcrafts and Clothing from the Himalayas