Summer solstice 2019: The longest day of the year, why isn’t it the hottest?

Summer solstice 2019: Our longest day of the year, is not the hottest… Why?

On Friday, June 21, the sun heats our planet longer than on any other day in 2019. So why isn’t it always the hottest day of the year? READ ON…

The summer solstice is our longest day and shortest night of the year, and the first day of astronomical summer [1]in Earth’s Northern Hemisphere.

This year’s solstice arrives at 5:42 a.m. in Los Angeles. At that exact moment, the sun’s direct rays reached as far north as they ever get, appearing straight over[2] the Tropic of Cancer, at 23.5 degrees north latitude. As a result, we see the sun take its longest and highest path[3] through the sky.

The number of hours of daylight we see depends on our latitude[4], or distance from the equator. 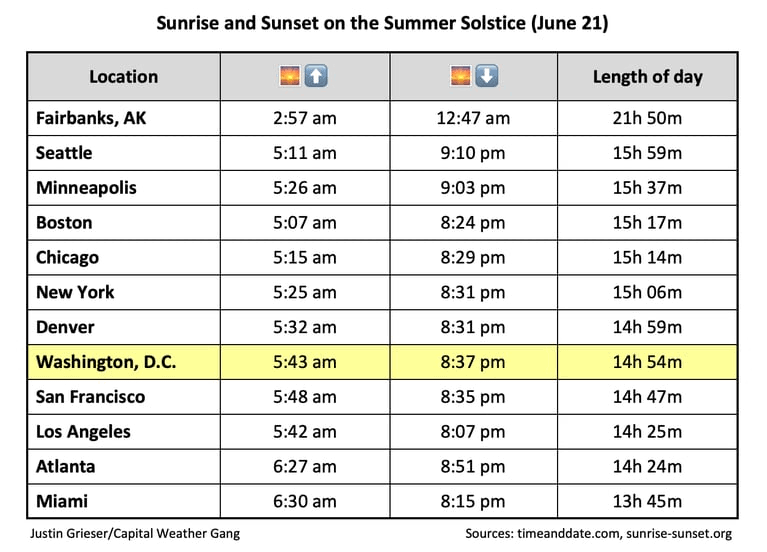 Locations to our north see even more daylight. In Seattle receives about 16 hours of daylight. Fairbanks, Alaska, the sun is up almost 22 hours ( 21 hours and 50 minutes). Along and north of the Arctic Circle, the location of sunrise and sunset starts to converge in the northern sky[7] until eventually the sun never sinks below the horizon. Instead, the sun circles through the sky for 24 hours, a phenomenon commonly referred to as the “midnight sun.”

One thing to remember is that while the solstice is the longest day of the year, we don’t see our earliest sunrise or latest sunset on June 21. Calculated down to the second, the earliest sunrise in Washington was at 5:42 a.m. on June 13, while the latest sunset occurs at nearly 8:38 p.m. on June 27. We can thank Earth’s tilt and our elliptical orbit around the sun for this astronomical quirk.

Highest sun of the year

Just as day length depends on how far you are from the equator, so does the sun’s height above the horizon. As you move closer to the North Pole, daylight hours increase, but the sun is also lower in the sky. On the other hand, places closer to the equator — such as Honolulu or Miami — see fewer daylight hours on the solstice, but the midday sun climbs considerably higher in the sky.

You can see evidence of the sun’s intensity just by looking at your shadow. With the sun nearly overhead, your noontime shadow on the summer solstice will be the shortest of the year.

The high sun angle is the reason it’s easy to get a bad sunburn in the summer. In June, the sun’s rays follow a much shorter path[9] through our atmosphere and therefore strike the ground more directly than they do in the middle of winter. Because the sun’s ultraviolet rays[10] are more concentrated, it’s important to lather on the sunscreen this time of year.

The reason we have solstices, and seasons, is because Earth is tilted on its axis[11] about 23.5 degrees. This causes each hemisphere to receive different amounts of sunlight throughout the year. In June, the Northern Hemisphere is at its greatest tilt toward the sun, bringing us more direct sunlight and warmer temperatures. It’s the opposite south of the equator, where June 21 marks the first day of winter and the shortest day of the year.

After June 21, the sun’s direct rays will again begin to shift southward from the Tropic of Cancer toward Earth’s equator. As a result, our long summer days will slowly get shorter again, though the change won’t be noticeable for a few weeks.

Even though we start losing a few seconds of daylight this weekend, summer’s hottest days are still upon us. Across much of the U.S. — and the Northern Hemisphere — the hottest day of the year doesn’t usually arrive until July or August.

This delay, commonly referred to as seasonal lag[13], happens because the amount of solar energy arriving at the ground is greater than the amount leaving the Earth for several weeks after the solstice. It’s largely driven by the oceans, which take a lot longer than land to warm up and cool down, and release heat slowly over time

As we head past the solstice into the final week of June, the extended forecast certainly appears summerlike. According to the latest outlook from the National Weather Service’s Climate Prediction Center[14], above-normal temperatures are likely for much of the Central and Eastern U.S. through early July.

Whatever the rest of summer brings, one thing is guaranteed: After June 21, daylight begins to wane for the next six months. So be sure to enjoy these long, bright evenings before the nights get longer again