Friday afternoon the crowd was hungry for a great set and eager to bounce around to some “New York HipHop”. Joey started off my weekend of music with a ton of energy as the 21year old MC hit us with his 90’s inspired hiphop flow. Joey’s set was full of hard-hitting slappers that gave rise to his fame including “Christ Conscious”, “Paper Trail$”, and “Waves”. Fans, such as myself, we’re pleasantly surprised when Joey debuted two new songs during his set that are anticipated to be on his next album. Joey Bada$$ drew in a huge crowd of fans as he brought his New York style to life with his presence on stage. 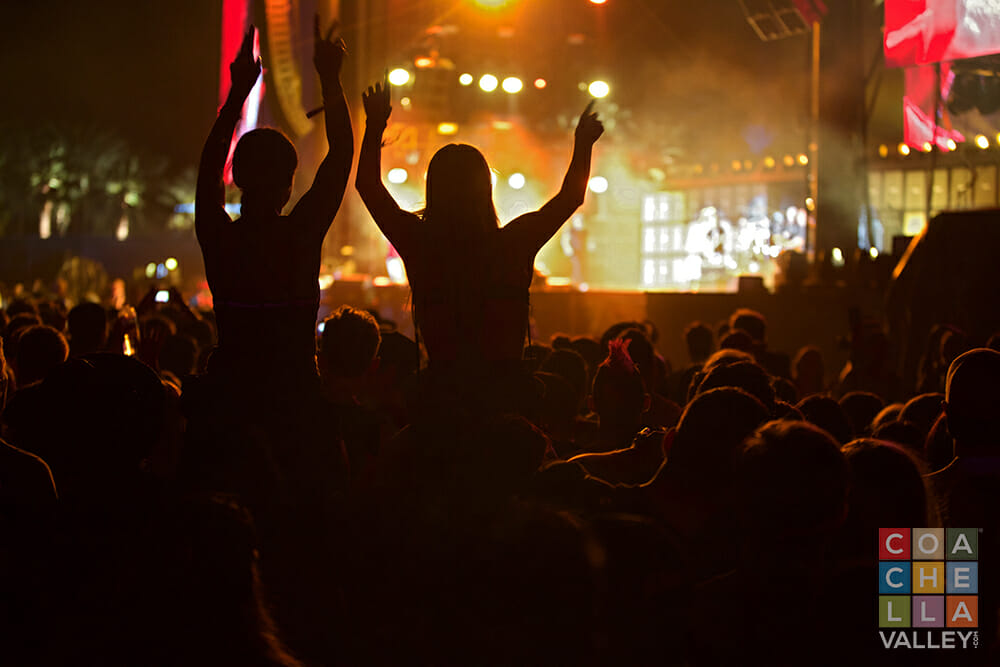 I gave every last ounce of energy I had left back to the group on stage until it was over.

Going into an A$AP Rocky show you can expect a huge stage production, rowdy crowds, and a set-list full of modern day hiphop classics. Rocky ran about ten minutes late and the crowd became a bit restless.  The set began with an interesting instructional video telling the crowd how to attend an A$AP Rocky show.  A seemingly humorous spoof liked to something you’d see play on an airplane instructional video. As Rocky begins his set with the catchy “JD” the crowd begins pushing and shoving to the beat. This continued until the set ended with me in festival heaven. I’m hearing some of my favorite tracks performed live, and reacting to the crowd with my own shoving as the crowd escapes in a sea of rebellious movements void of any sense of social norm. Rocky surprised by bringing out Kanye West to perform a song fresh off his latest album “The Life of Pablo.” I watched one of music’s biggest stars, completely, stunned. Unfortunately, due to Rocky’s late start and lengthy video introduction, the set was cut short and the artists’ mic was cut off before he could finish. A huge disappointment at the peak of the crowds’ excitement.

Not many artists can say they’ve played Coachella back-to-back.  Golden Voice, usually, avoids this to keep the lineup fresh.  However, a group as socially-powerful and as fun as Run The Jewels certainty deserves this right. The dynamic duo consists of Killer Mike and El-P creating lyric driven hip hop that tackles social issues and often times gets political. Speaking of political, the group was introduced to the stage by Presidential Candidate (and close friend to Killer Mike), Bernie Sanders. The moment was magic as the crowd cheered for Bernie and made us all feel like we were witnessing something very important. Run The Jewels kept the crowd bouncing with their high-energy performance with more surprises coming and Nas coming out to perform his classic track “Made you Look.” Run The Jewels at Coachella 2016 remains one of the most memorable performances as they, consistently, performed at high intensity.

It felt like there was a nervous excitement in the air for Gun’s N’ Roses to take the stage in anticipation of the, likely, iconic songs sung by Axel Rose with Slash.

Gun’s N’ Roses came out… shall we say, Gun’s Blazing? They were nothing less than incredible. Axel Rose, limited to his throne of guitars (due to a broken leg) shined as his beautiful voice pierced the night. Axel Rose and Slash seemed in good spirits on stage. We saw Slash playing closely to Axels chair and Angus Young hit the stage to play a couple songs from his own AC/DC. I had to take a moment to say, “Wow!”,  as I witnessed these two guitar gods on one stage. Although Gun’s prime was much before my time, I still felt the weight of the moment. Courtesy of my Dad (it’s his favorite band), I’ve heard the classics play my whole life such as “Paradise City”, “ Sweet Child O’ Mine”, and “Welcome to the Jungle”. Yet, hearing them live was truly magical. 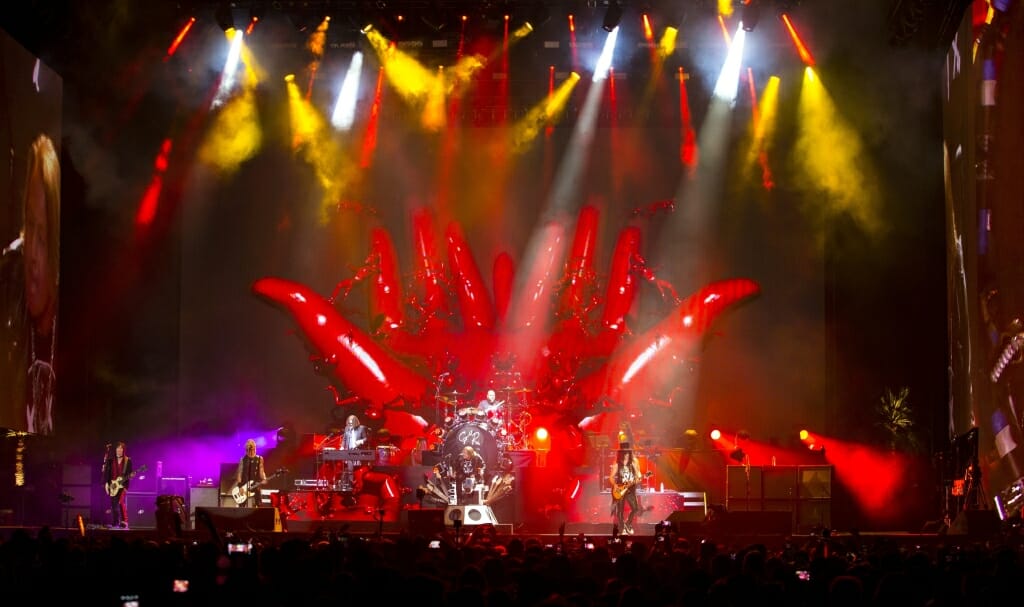 Gun’s N’ Roses came out… shall we say, Gun’s Blazing

Death Grips, is the punk/hiphop group that I find myself listening to everyday. Moments before the set I find myself feeling anxious as my 3-day adventure is coming to a close and somewhat exhausted from the excitement of the weekend.  Although this is the band I have been waiting for…I’m all of a sudden wondering how am I going to truly enjoy this set feeling this way.

When vocalist MC Ride hit the stage with his eerie presence, pure adrenaline hits me. Zach Hill starts beating his drums to death and the crowd starts pushing to create one of the most lively mosh pits I’ve ever seen. Death Grips never takes a break, never takes a moment to address the crows, instead, continuing to transition into each song as the crowd freaks out…in a good way.  After so much anticipation, I didn’t think I would be able to enjoy Death Grips, but the group brought me to life as I danced, moshed, and screamed the lyrics.  I gave every last ounce of energy I had left back to the group on stage until it was over. 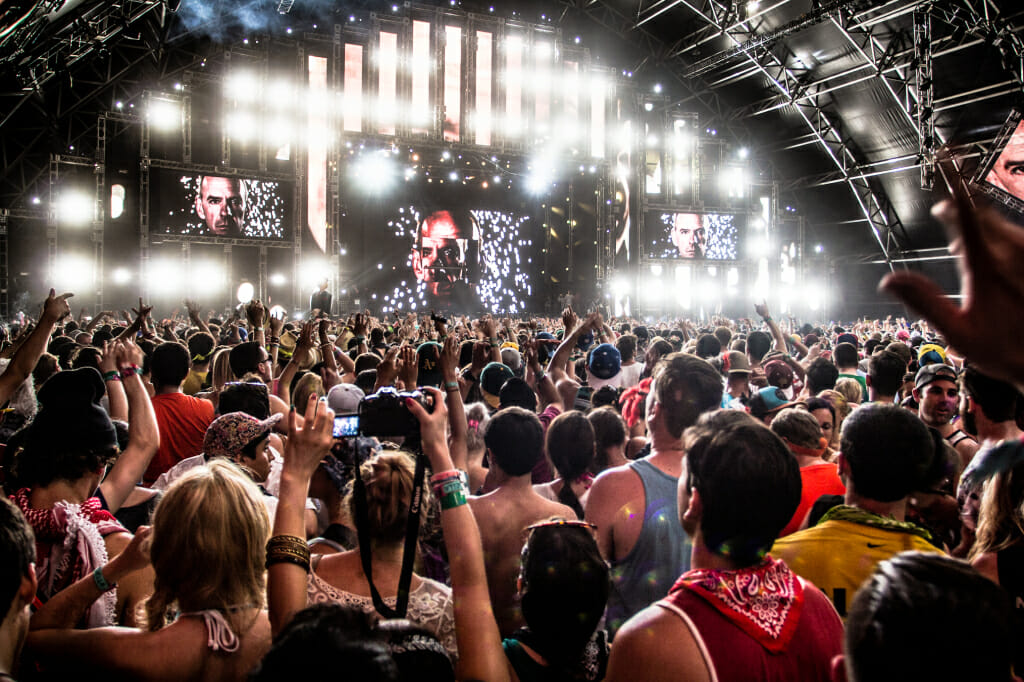 The crowd was hungry for a great set and eager to bounce around to some!