Sean Webb, is the man behind the hashtag #desertwebber 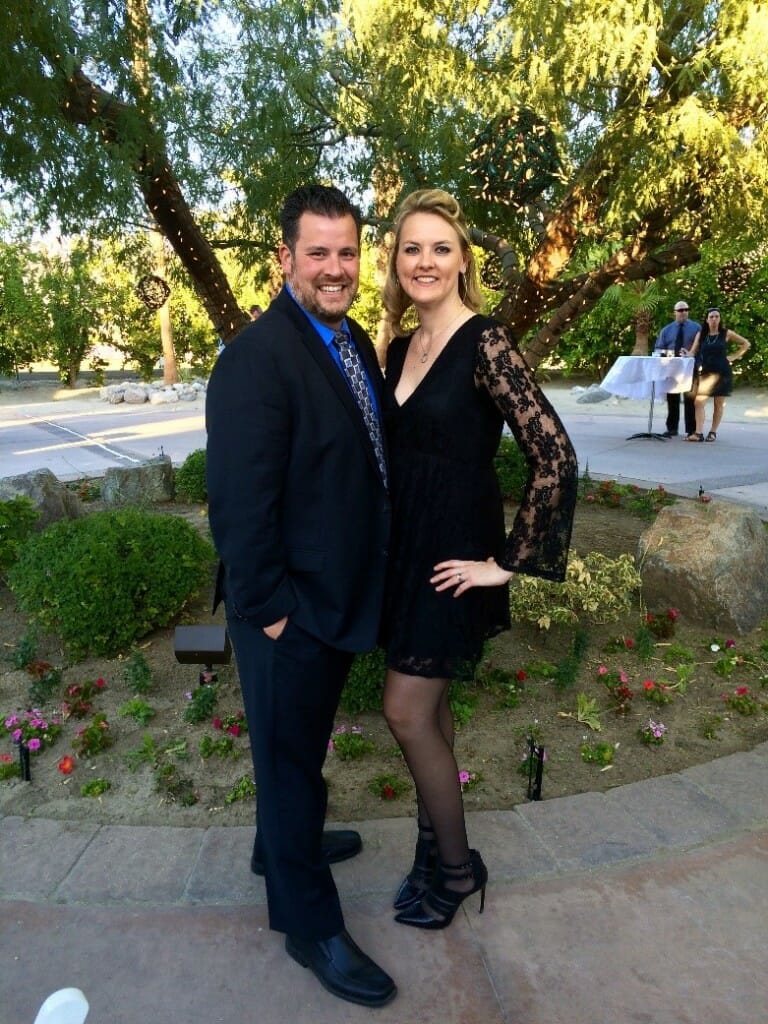 If you frequent Facebook, Twitter, or some of the desert’s local blogs, you may have seen the hashtag, #desertwebber and wondered what it is about. It is attached to so many different posts, I had to track down its creator, and ask him what it is all about.

La Quinta High School administrator and Director of Career Technical Education, Sean Webb, is the man behind the hashtag. I sat down with him to find out how this one guy and his lovely wife, Tara, could have so many irons in the fire.

With a very humble delivery, Webb tells me, “We are the Webbs, just doing our thing – Desert Webber.” He told me the hashtag was an idea spawned by his fraternity brother Joel Lunenfeld, who happens to be Twitter’s V.P. of Brand Strategies. Webb learned from Lunenfeld that a hashtag gets you noticed and gets you connected. 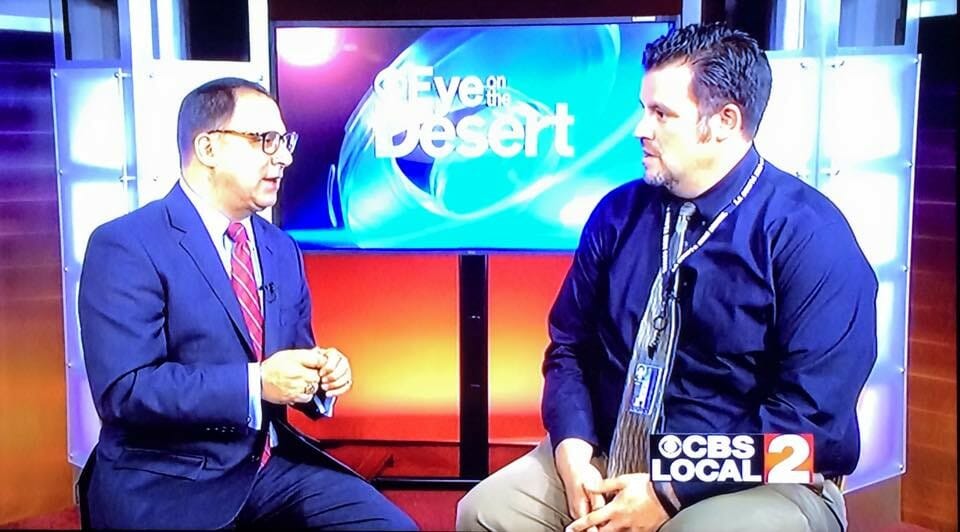 In addition to shepherding the technical career futures of over 2,700 students at La Quinta High School, Webb oversees the day-to-day operations of the Blackhawk Culinary program, the Public Service Academy, the Medical Health Academy and the newly-added Information Technology section. Mr. Webb, as the students affectionately call him, is immersed in the academics, practical skills, presentations and events associated with these magnet school programs as well.

In the spring of 2014, Webb reached out to KESQ News Channel 3 and local media personality, Bianca Rae to emcee the first Blackhawk Culinary Showdown. In this event, La Quinta High School’s world-class kitchen facility becomes center stage for a competition between two chefs from local resorts, who are given predetermined ingredients. These fine ingredients are provided by Crown Meats, North Shore Living Herbs, L & G Desert Store, and others. With the help of culinary class members from the student body, the chefs create meals in a head-to-head competition. These competitions raise money for The Bianca Rae Foundation, American Diabetes Association, and others. In addition, a drawing is held in which the two winners receive a $1,300 dinner for ten presented to them at a predetermined resort location by the culinary students. These events alone have raised over $30,000 and $7,000 of that has gone to local charities.

Webb adds that Ms. Rae has also mentored many of La Quinta High School’s students outside of these programs. He cites one example where Ms. Rae helped a high school junior who makes jewelry by helping her learn to promote her business. This student’s jewelry is now sold at several local valley resort locations. 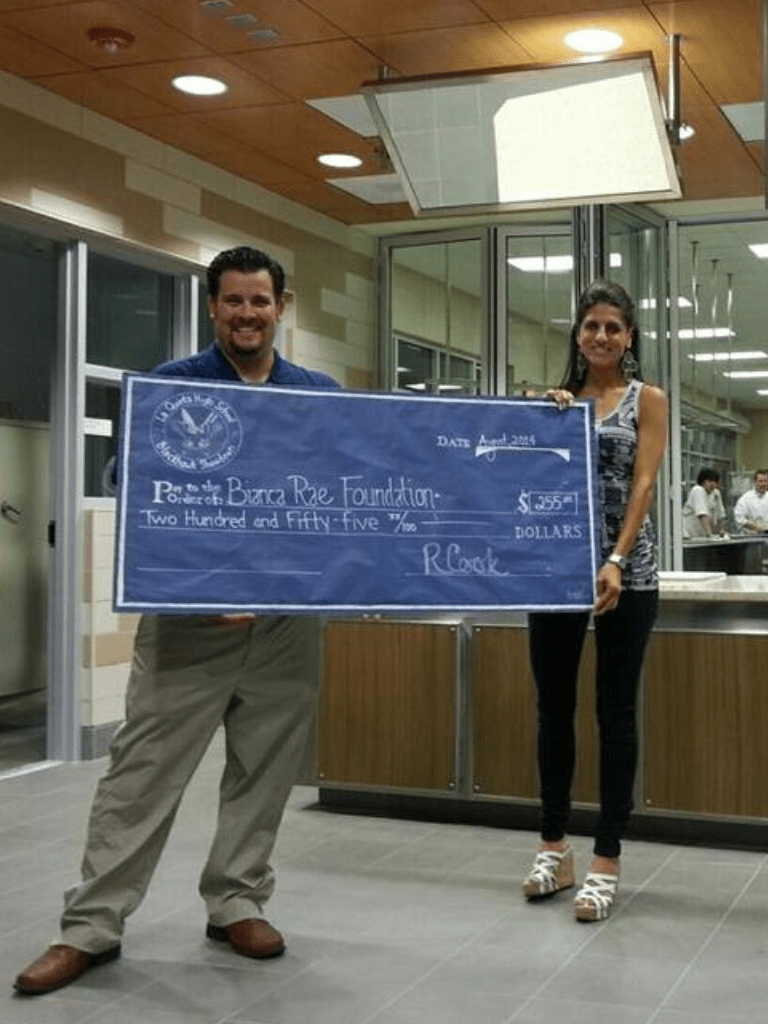 On the recent Clinton Day of Action, promoted by Chelsea Clinton, funds were given to La Quinta High School to build a greenhouse. Local organizations involved were: North Shore Living Herbs, Burrtec, Women of Agriculture of the Coachella Valley, Ocean Mist Farms, and local Masterchef Season Six finalist, Stephen Lee. Webb told me there were more plants donated than the greenhouse could hold. The solution was agreed upon to place the remaining plants around the campus, and give others to the participants. This allowed Webb and others to create their own herb gardens at home.

Webb shared a picture of his wagon garden with me. This small herb garden is pure genius. Webb says Janelle Percy of the Coachella Valley Women of Agriculture told him, “Just go to the 99 Cent Store, buy some litter boxes, and drill small holes in the bottom, put them in a wagon, and plant your herbs and other small vegetables. When the weather becomes too extreme, simply wheel the wagon to a better place until the bad weather passes.” I have to admit, I cannot wait to create my own as soon as summer is over!

Outside of his administrative position at La Quinta High School, Webb supports the American Cancer Society. Webb says this is close to home as cancer is prevalent on his wife’s side of the family. Recently, Webb was the culinary chair on the board of directors for the American Cancer Society’s Gala on April 3 at the Heckman Estate on Clancy Lane in Rancho Mirage, where $197,000 was raised for cancer research.

Webb also became a member of Leadership Coachella Valley (LCV) last year. This organization is a branch of a larger organization which is a model for urban centers throughout the United States. Webb explains, “…because the Coachella Valley doesn’t have an urban center, it was decided to combine resources throughout the Coachella Valley, so our whole desert region, as one large community, could benefit from this program.” Other key LCV members that Webb works closely with are: Riverside County Sheriff, Stan Sniff, Cal Fire Chief, John Hawkins, California Senator, Jeff Stone, and Living Desert representative, Erin Sullivan. Webb’s success and contributions to LCV have earned him a position on their board of directors in 2017. Webb says, “Much of the networking and experience gained through my experience with LCV is brought directly back to my office at the school, where it helps build a better school community, as well.”

To answer my original question: “How do you do so much?” Webb responded, “It just happened gradually over time. Things start to happen, you do more and more, and at some point you have to learn how to say, ‘No.’ when it gets too crazy. So far,” he adds, “we seem to be able to keep up with it all.”

Webb says his love of community and giving back were instilled in him by his father. He remembers, “When I was growing up in Newark, New York, my classmates and I were on a basketball team. We had those really old uniforms, you know, the ones where the shorts are way too tight and short, and the tank tops were tattered and mismatched. So one of the other kids on the team, Joey Wahl, said, ‘Let’s just ask Mr. Webb for new uniforms…’ He was talking about my dad.” In that moment, Webb said that he welled up with pride in knowing that people knew they could count on his dad to come through when someone in the neighborhood needed something. So Webb’s father, Michael Webb, is the inspiration for his philanthropic spirit. 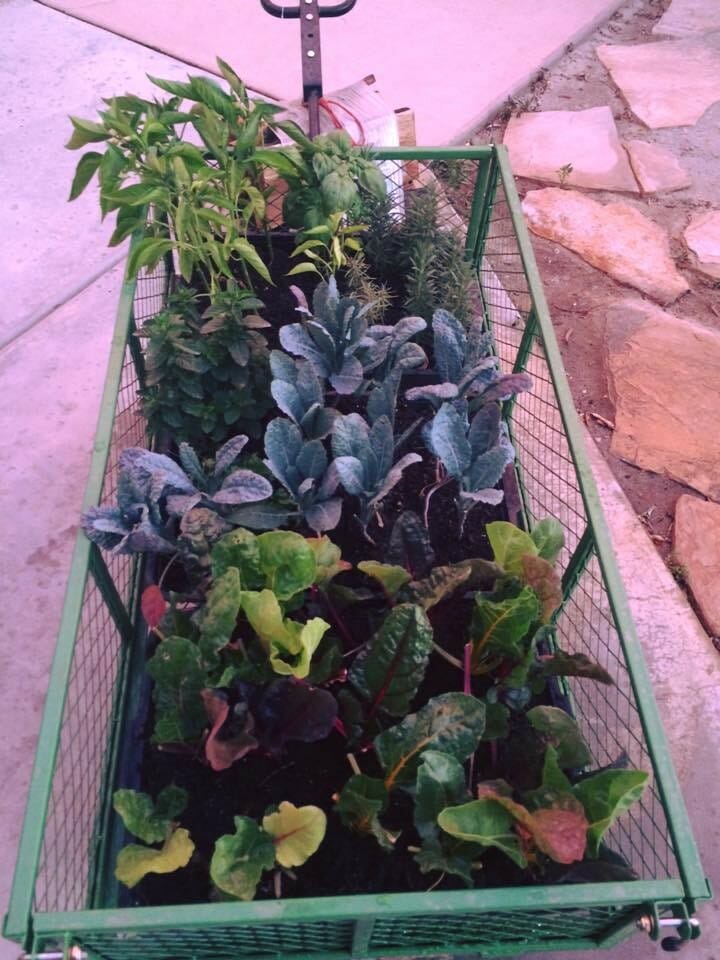