For many years I have been asked, “Jim, have you been to Salvation Mountain?” Which I’ve quickly answered, “No, but it looks interesting. It just isn’t very high on my list of places that I want to see.” Followed by, “I’ll get around to it someday.”

Well, that “someday” has come. But it probably never should have.

I can’t find a positive word to say…and I should probably leave it at that. But I simply can’t, and I’m sorry in advance if I offend anyone in the audience.

When I pulled up to Salvation Mountain, my mouth dropped, and a horribly uncomfortable feeling came over me. A feeling of disgust, and of overall disdain. The feeling that everything that I love about the desert had been tarnished in one quick instance.

The mountain of colorful paint, with sayings such as “Jesus Fire,” “God is Love,” along with The Lord’s Prayer, and various Bible verses, made my stomach churn. 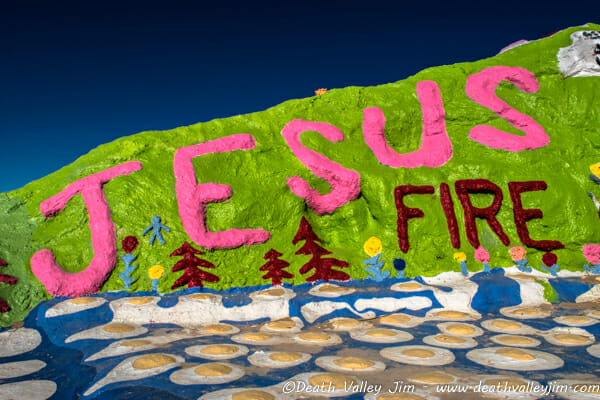 What would Jesus do? Would he paint his name on a hillside? 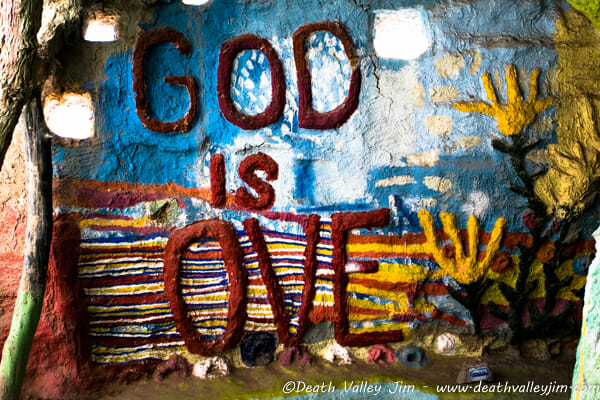 Now I’m not a religious person, but I do consider myself a spiritual person. I find myself more in tune with the spirit of nature, and a natural surrounding.  The Christian slogans, and the cross on top of the hill, I do not find offensive – I’m not one of those that are intolerant of other people’s beliefs. I also take no issue with the public display of religious symbology. This is America, and one has the right to religious freedom, and in my opinion, the right to express that.

As someone who is vehemently against the destruction of our desert by solar and wind energy corporations, I certainly can’t overlook the fact that this “art” is the destruction of a natural environment, and has the potential to over time create further environmental problems for an area that is already plagued with the nightmare issues that the Salton Sea has caused, and will continue to cause for an undetermined period of time.

In 1994, the Imperial County Supervisors had a series of tests performed on the soil around Salvation Mountain. Those tests returned a high contamination of lead, and the county deemed the mountain, a “toxic nightmare”. Leonard Knight, the artist responsible for the creation of the mountain of “art”, had his own independent tests performed, utilizing the same test holes as the county, and those tests came back negative for lead contamination.  The county left Knight, and the mountain alone after the results of the independent testing. But should they have?

I’ve heard the argument that the paint used by Knight was latex, and that is the type of paint that is continued to be used today. The latex argument is still not valid in regard to environmental hazard. The Pollution Prevention Regional Information Center[3] cites latex paint as, “Highly toxic to the environment. It harms fish and wildlife, and contaminates the food chain if poured down a storm drain. It can also pollute groundwater if dumped on the ground.” 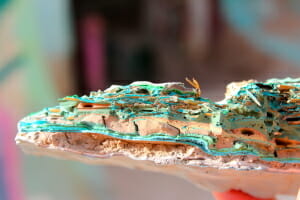 Not your ordinary paint chip, this paint chip is over an inch thick. To a bird, this may look like a tasty toxic treat.

This is a frightening fact, considering the southern end of the Salton Sea is largely an agricultural area – as well the home of Salvation Mountain. There is also the possible impact of paint run-off making its way to the Salton Sea, itself. The Salton Sea is along a major bird migratory flyway – every year thousands of birds make a pit-stop along this accidental water mass. It is very likely that a toxic pollutant could produce a mass kill off. Will these things happen tomorrow? Probably not, but in the long-term – it is probable.

This is by no means an attack on Leonard Knight, despite having never met the gentleman he is portrayed as a kind soul. Because of this, I in no way believe that this gentleman would have created Salvation Mountain, if he was aware of the possible long-term effects.

Leonard Knight spent three decades of his life building and maintaining his mountain, also spreading a message of love, and peace. For that he will always remembered. Knight passed away at the age of 82, on February 10th 2014.

Today, Salvation Mountain is looked after by the nonprofit group, Salvation Mountain Inc.. They continue to do upkeep on the mountain, including adding fresh coats of paint, and patching adobe. Visitation is permitted, with a full-time caretaker on site.

About the author: Death Valley Jim is an author, photographer, radio talk show host, explorer, and adventurer.  Jim can be heard every Saturday morning in the Coachella Valley on KPTR 1450-AM[5] from 8am-9am, on The Death Valley Jim Radio Program.  You can also visit him on his website[6]. 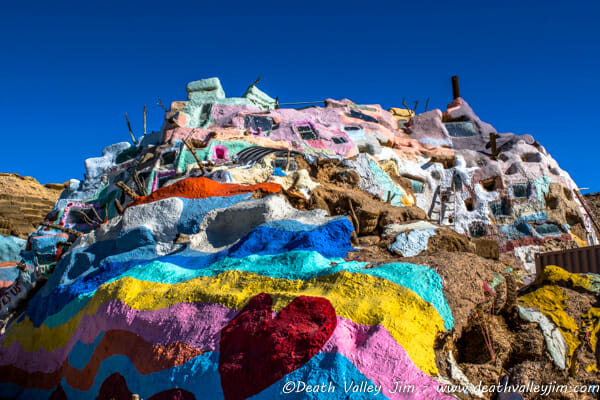 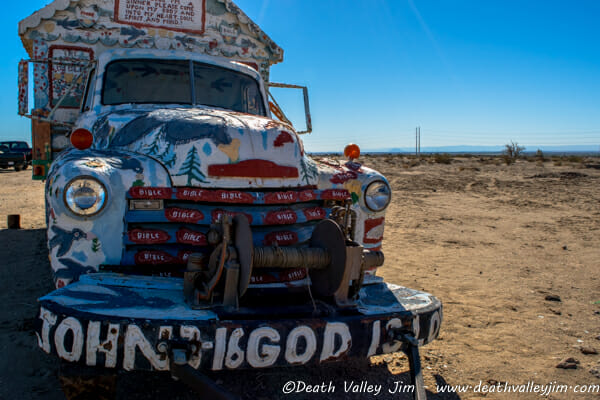 A disturbing display of “obsession”.