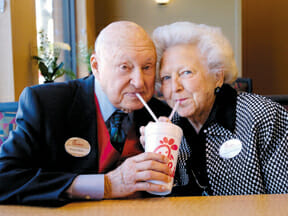 He died at his home in Clayton County, Ga. surrounded by his family, a Chick-fil-A spokesman said.

“In every facet of his life, Truett Cathy has exemplified the finest aspects of his Christian faith,” former President Jimmy Carter said in a statement. “By his example, he has been a blessing to countless people.”

Cathy dedicated his time and resources to many philanthropic causes, focusing on those related to the welfare of needy children.

On October 28, 2006, Cathy received the last vehicle off the assembly line of Ford’s Atlanta plant, in recognition of a 60-year relationship between him and the plant. The plant, located near Cathy’s original Dwarf Grill (now Dwarf House), opened one year after the restaurant opened, and Truett regularly served during all three shifts at the plant.

Cathy had a Leadership Scholarship program for Chick-fil-A restaurant employees, which has awarded more than $23 million in $1,000 scholarships in the past 35 years. 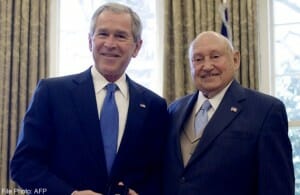 n 1984, Cathy established the WinShape Foundation, named for its mission to shape winners. In 2010, the foundation provided roughly $18 million to fund the development of foster homes and summer camp. Past donations from the WinShape Foundation include the funding of several college scholarships and marriage counseling programs. The foundation has awarded nearly 820 students of Berry College with scholarships of up to $32,000.

In 2008, Cathy’s WinShape Foundation won the William E. Simon Prize for Philanthropic leadership which awarded it $250,000 towards future philanthropy, as a result of its contributions to society.

In recognition of his philanthropic efforts through WinShape, Cathy received the Children’s Champion Award for Family and Community from the charitable organization Children’s Hunger Fund in 2011 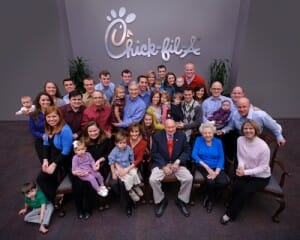 In the five books he wrote, Mr. Cathy often emphasized the importance of giving over receiving and of treating others as you would like to be treated.

Whether or not you agree with his religious beliefs does not negate the many lives who have been changed because of this mans generosity.  We can have difference of opinion and yet still show respect for a man who made a difference in this world.

Thank you Sir for setting an example of excellence!