Mud Volcanoes near the Salton Sea??

Along the eastern shoreline, near Bombay Beach, Elite Tours owner Mark Farley leads his group a short distance from the Highway 111 roadway and picks up a rock. It is no ordinary rock, but rather pumice: the hardened residue of volcanic froth. Because the froth was filled with gas, the bubbles “froze” in place, resulting in a rock now filled with air that will float. A specimen 7 inches around weighs a mere 3 ounces. Farley says the pumice scattered on the crusted clay ground was washed there by floodwaters.

According to the San Diego State University Center for Inland Waters, an intrusion of molten magma about 20 miles long, four miles wide, and at least one to two miles thick lies perhaps as close as 4,000 feet from the Earth’s surface along the southeast shore. Temperatures in the Salton Sea Geothermal Field can reach 680 degrees less than a mile below your feet.

While geothermal plants at the south end of the Salton Sea evidence the active metamorphism of rocks below, we get a more intimate look at the process near the Imperial Wildlife Area. Here, the earth has sunken into more-or-less-round pits. As we approach, we hear the bubbling caused by carbon dioxide rising from below the water table through vent points along earthquake faults. Standing on the edge of the pits, we peer down into what could be a series of witches’ brews. But, although the muddy water appears to be boiling, it is ambient temperature. Watching the bubbles is mesmerizing; and listening to the different pitches created by various sized and shaped pots brings to mind a symphony — one the rhythm section, one the strings, and one the brass section.

Odder still are mud volcanoes grouped across an expanse of dried clay about the size of a football field. Where the pots gurgle, the volcanoes burp. Steam rising from the vents tells us there is more heat here; the liquefied mud in one volcano is 128 degrees. The sounds coming from inside the volcanoes allow us to imagine a ticking bomb, water slapping the side of a bucket, or the croak of a 100-pound frog. Ranging from ground level to 8 feet and with vent openings ranging from a half-inch to a foot in diameter, the volcanoes spit mud intermittent heights at intermittent intervals — creating a challenge for any photographer hoping to capture the greatest eruptions. As the mud oozes down the side and dries, the volcano grows thicker. Looking at the site as a whole — with the surrounding crusty-salt surface, plates of cracked clay, and more mud pots — one can without difficulty imagine that they are walking on another planet.

United States Geological Survey scientists estimate volcanic domes at the Salton Sea are 16,000 years old. Farley takes us to Obsidian Butte, one of five rhyolite domes. Scattered along the ground are chunks of shiny, black glass — obsidian — created from molten magma coming in contact with water and cooling before crystals can develop. Iron and magnesium make the glass black, and these specimens appear to be rich in those minerals.

A mere 20 feet away could be another world away. Instead of shiny black glass at our feet, crusty white barnacles crunch with each step. These remnants of the past are considerably younger than the pumice, mud pots, volcanoes, and obsidian. And they were brought here not by Mother Nature, but rather by seaplanes and boats when the San Diego Naval base conducted training at the Salton Sea during World War II. 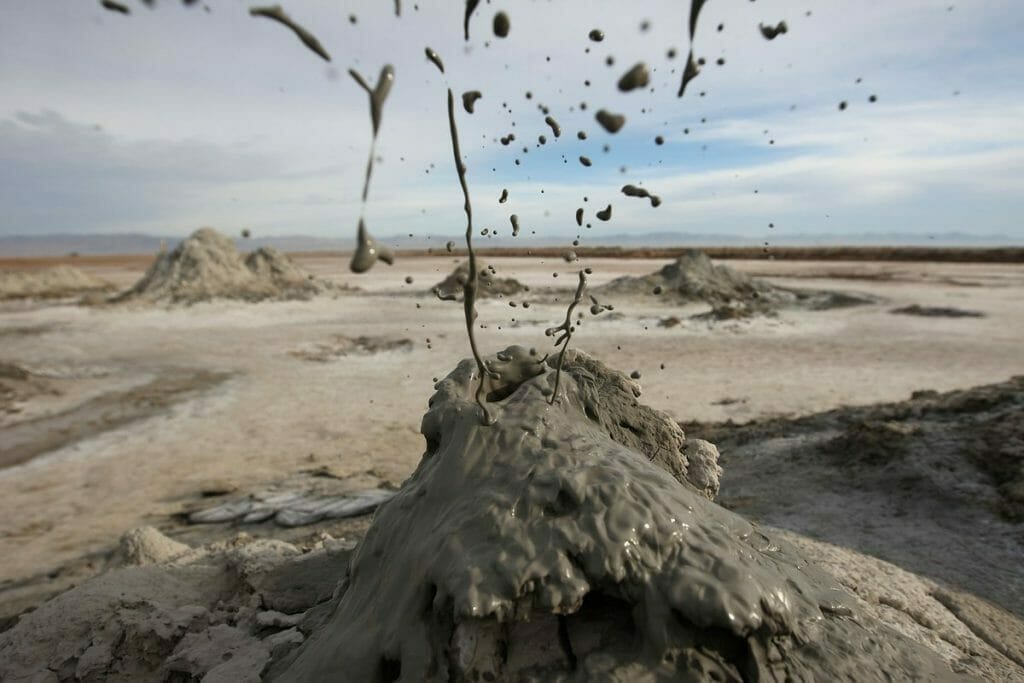