Shane “Mixi” McKnight and Beau Griffin from BBC, preparing for Coachella at the Tack Room outdoor bar, where some of his signature concoctions will be served all year long.

Everything is Big at Coachella: Big Music, Big Venue, Big Money and a Big Cocktail Program engineered and delivered by an even Bigger, passionate, master mixologist and personality Shane McKnight, who Nickname is “Mixi” for a good reason.

The Coachella Valley Team had a chance to sit down with (Dr.) Mixi (yea we added that) to talk High end boos at this year’s Coachella Valley Music and Art Festival. When we showed up Mixi and his team had been hard at work all day preparing for the almost 100,000 crazed music and cocktail lovers arriving tomorrow. Craft Cocktails is what the buzz is all about

We met up with Mixi, from the Best Beverage Company (BBC) and team members, Beau Griffin (Mixi’s #1 guy) and Nate Fields at the Tack Room (where Shane “Mixi” McKnight has a great cocktail menu all year round). Polo Ground security was tight and we could see from our vantage point, the grounds were filled with armies of workers – the Ferris Wheel was awaiting the next wave of attendees for Weekend 2.

Many of you might know Nate from the Yard House at the River in Rancho Mirage or Madison Club where he works as a Bartender. But every year during both weekends of Coachella and Stagecoach his employers give him time off to serve Mixi and BBC in order to deliver out of this world service, entertainment, and attention to every detail handcrafted cocktails.

Shane has worked festivals and concerts with BBC since 1997. After 12 years of working the craft cocktail scene in San Francisco bars and restaurants, Shane came back to work with Dirk Alton and BBC to design and engineer a cocktail program big enough to handle Coachella.

To hear Mixi talk about what he and his team accomplish you know that Goldenvoice and BBC has the right guy in place. “Batching fresh cocktails into chilled kegs just a few hours before the guests arrive allows us to get way more complex and accurate with cocktail formulas. The kegs actually keep the cocktail fresher and colder than any other container.” Mixi said. 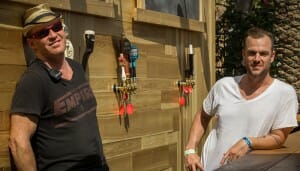 PHOTOS: Although the actual Coachella Craft on Draft menu is top secret, Mixi shared some of his past recipes from previous events and festivals. Shane “Mixi” McKnight and Beau Griffin from BBC, at the new Tack Room outdoor bar, where some of his signature concoctions are being served all year long.

From the Master Mixologist himself here is MIXI’s OWN GREATEST HITS COCKTAIL MENU from some recent festivals. 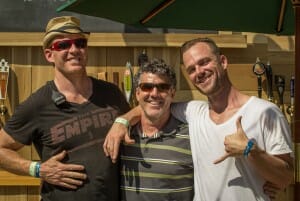 Last year we hear they couldn’t get enough of his famous “LIVE” MOSCOW MULE which is based a hand-crafted “live” ginger beer, Absolut Vodka, fresh lime & house-made saffon bitters. The buzz this year is… well that’s top secret for now.

If you find yourself looking for a good cocktail at Coachella you’ll find Mixi and his “CRAFT ON DRAFT COCKTAIL MENUS” this year in the Speakeasy, the Rose Garden and the Main-stage VIP Area.