Did You Know… Skipper from Disney’s Movie “Planes” was Inspired by The F4U Corsair at the PS Air Museum??

Did You Know… Skipper from Disney’s Movie “Planes” was Inspired by The F4U Corsair at the PS Air Museum?? 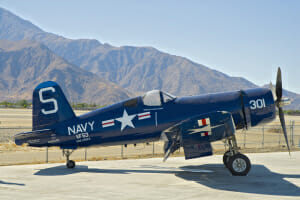 The Corsair that inspired Skipper in the Disney Movie “Planes”

The F4U Corsair at the Palm Springs Air Museum inspired the character Skipper in “Planes”.

Disney recorded engine sounds from one of the museum’s planes for Skipper’s engine noise, according to the museum.

Disney came out to the Coachella Valley’s Palm Springs Air Museum  to record sound from the plane.

“They came out and took all kinds of recordings from the engines, to the wings folding, everything and then they incorporated that into the movie.” says Managing Director of the Palm Springs Air Museum Fred Bell

The Palm Springs Air Museum is also home to one of the world’s largest collections of flyable WWII aircraft; and unlike many other museums, our air-conditioned hangars have no ropes to keep you from interacting with our exhibits.

In addition our aircraft, exhibits and activities allow visitors of all ages to gain a fresh perspective of World War II — the unparalleled event that shaped the world we live in.

They have an extensive library and our crew of trained volunteers can provide you details on the aircraft and a sense of the experience of flying them.

Additionally, a number of aircraft are open for tours every day.  Children of all ages are entranced by the big planes and entertained with related activities, from our kid-sized control tower to flying our simulators.

We are also pet friendly to friendly pets 🙂