If you’ve spent any significant time around Joshua Tree, you’ve likely heard a rumor about the “Joshua Tree Car Wash.” No, not an actual car wash, but rather a wash in the Pinto Basin rumored to contain the wreckage of several vintage automobiles. Of course the rumor comes with no details of where said “car wash” can be found, leaving it open to be nothing more than just a fabricated story.

I first heard about the “car wash” three years ago, and on and off over the those years I became slightly infatuated with finding it, but not really putting all that much work into the research. A few months ago photos of the “car wash” made their way online, and I was instantly jealous that someone else had managed to find it. The thing is, that person is someone who I am friendly with, but not to the point that I’d want to outright ask, “Hey, where is that?” Some months went by, and the “car wash” remained fresh in my mind. I finally gave in, and sent the message, “Is there anything that I’ve been to that you would be interested in trading for the location of the “car wash”? 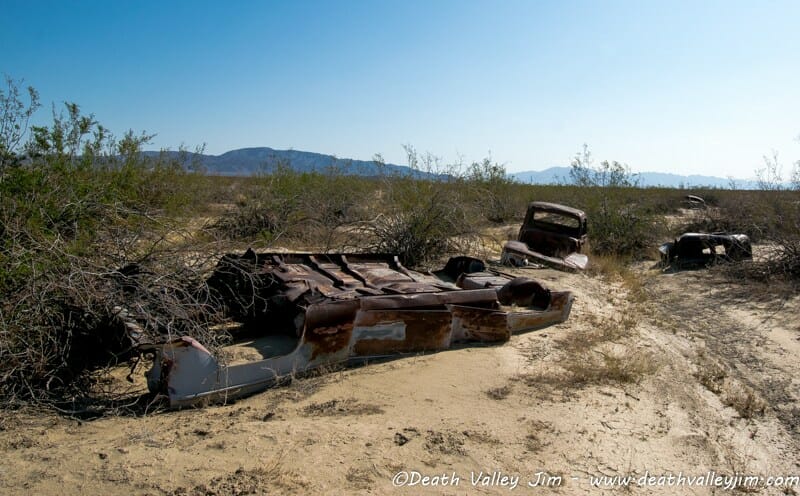 …and here is where it becomes odd. That same day, before the other guy was able to respond, Ranger “X” sent me the coordinates of an old well site in the Pinto Basin, suggesting that we check it out. I replied in agreement, and stated, “I bet the car wash is around here.” I then returned to looking over the area with Google Earth, and sure enough, there it was, the “car wash”!  I messaged the other guy back saying, “never mind, found it.” We later exchanged messages, and agreed to meet up the next time he is in the area.

This all went down this past Sunday, and I’ve itched to get out there since. Ranger “X” was unable to join me on my first available day, so I decided to head down there myself this morning. Reaching the place where I needed to hike in from around 8:30am, it was already 92°F. My estimates placed the total round trip hike at between 3-4 miles across the basin. The route was flat, making it an easy stroll, however there was no shade to be found. I hiked the wash for the distance, and found plenty of historic trash ranging from glass bottles and jars, cans, oil barrels, and sheet metal. 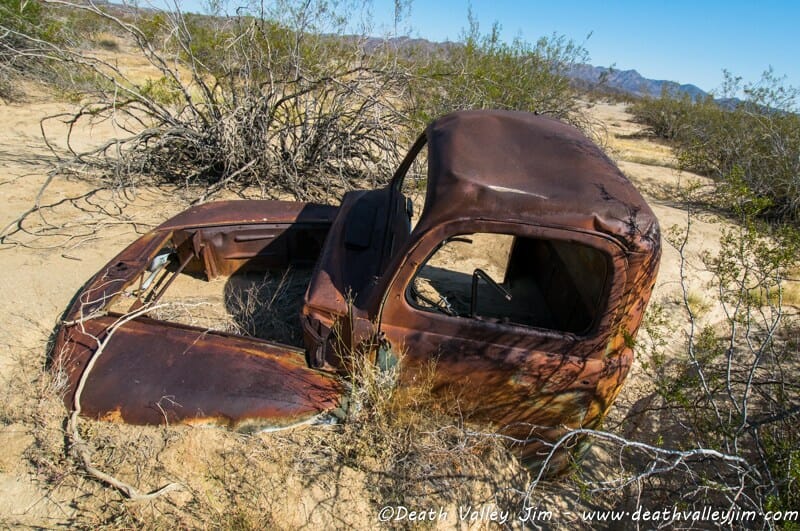 Just a little over a mile, and I arrived at the “car wash” graveyard.  It was as amazing as I had imagined it to be. Nearly a dozen old cars lined the wash, each in a varying state of decay. Some in better shape than others, like the Cadillac, which you can see in the gallery below. The question obviously is why were they all dumped here? I’m going out on a limb here, but I believe that a nearby site may have once had an automobile shop, but that story is for another day.

Finishing up at the “car wash,” I ventured a little further out to a couple of other sites of interest. The return hike was hot, much hotter than it had been just a few hours prior. The back of my head felt like the sun had a magnifying glass pointed straight at it. Once back to the Jeep, I checked the temperature, 105°F. Boy, do I look forward to fall temperatures.

Find out more about Death Valley Jim at https://deathvalleyjim.com/