Josh Del was born and raised in the Coachella Valley. From his birth at the Desert Regional Medical Center in Palm Springs, to the family restaurant where he worked until the day he left for college. Weekends were spent in the dirt, whether it was dirt biking, drifting sand rails or catching scorpions; he and his family embraced their surroundings. That is, when the summer sun allowed them to be outside. With the norm for mid-summer months reaching over 120 degrees it comes as no surprise that at least three months out of the year were spent inside.

The time spent inside is where Josh’s love of music came into play. In third grade he had a teacher who volunteered his time after school to teach children guitar. It started with a few chords, playing simple versions of old hymns; but laid the groundwork for the rest of Josh’s musical career. Learning those simple chords and songs, helped him understand melody and songwriting a little more than he had before. That teacher recently passed away, “I can never repay Mr. Wilson for the time he invested in me as a third grader and I will always be thankful for him.” Josh said.

Throughout middle school and high school, Josh played in bands both as a front person and lead guitarist. In high school though, he always felt a little out of place, because he also played football and sometimes the music crowd and the football crowd didn’t blend. He always had a diverse friend group, which he believes has allowed him to see the world through a lot of different people’s eyes; but it also exposed him to more than he would have liked at the time. It was in his sophomore year that he started to learn about the darker side of life.

During November 2006, Josh lost a friend he had known since he was five years old to suicide. Within the same school year he also lost another friend to suicide and shortly after, another. During this same time, a lot of the people Josh knew, both friends and acquaintances started to experiment with drugs. It started with prescription pills, but quickly moved to the harder opioid, heroin. By his senior year of high school he probably knew 15-20 peers who were addicted to heroin. “These kids I knew weren’t just from hard backgrounds, they were kids I grew up with, going to church and playing team sports. It became a harsh reality that no one was above addiction,” Josh said. Maybe it was all the time spent inside during the summer or maybe it was that there wasn’t much to do during those years of growing up, but Josh knew two things, he needed a change and he wanted his friends back.

After he graduated high school, Josh packed his bags and headed to Newport Beach, where he went to a small, private university.  He enrolled in the Communications program with an emphasis in Public Relations. It was during that time that he started taking photographs and also met his song writing partner and best friend, Connor Shambrook. “Although I didn’t use my degree for a traditional route of working at at PR firm, it helped me understand how people think, what catches their eye, their ear and their attention,” Josh explained. This skill became extremely useful in both photography and music, as one could imagine. It wasn’t long after Josh graduated college that he landed his first photo in an online Vogue editorial, then later a print edition of the same magazine. The following year he would also land publications in Rolling Stone and Billboard. Having extremely talented musician friends in the industry who let him take their photograph didn’t hurt either. This last month Josh’s photo of friend, Mickey Shiloh was featured in Forbes Magazine “30 Under 30,” highlighting some of the greatest, young musicians in the industry right now.

While he was starting his photography career, music took the back burner in Josh’s life. However, without my first love of music, life seemed relatively empty for Josh. He began writing for placements on television and film with friend and fellow musician, Connor Shambrook. This past year, a song they co-wrote was featured on the World Cup, a monumental achievement for them both. Although these successes were great, Josh felt this type of music made for placements often lacks depth and genuine feeling. That is why he decided to create the Old Crow EP.

This record is a nod to where Josh grew up and the things he experienced throughout his life in the Coachella Valley. The five songs capture the experience of love, loss, heartbreak and appreciation. “When I was writing this album, I wanted something real and raw, not just to highlight the good times I had, but the lonely times; to capture that feeling at sunset in July where it’s so quiet, but so hot, and the feelings of uncertainty that come with it. To me, this music tells the story of a kid growing up in the dirt, getting knocked down and learning how to get back up. The desert is where some of my best and worst stories take place and that is really good material for songwriting.”

Of course, like any new project, you hope it is well received. Josh said he will keep writing these songs that take him back to the memories that he can relive through lyrics, and he wants other artists to experience the same. “It is a goal of mine to one day put a studio back in the desert, my hometown that inspires me to write like nowhere else. The Coachella Valley has some extremely talented people and I would love to encourage them to tap into that place deep in their heart and create something from of it. While I’m unsure about what the future holds for both photography and music, I am certain that I owe a large part of the success I’ve had to the Coachella Valley.”

The EP, Old Crow by Josh Del is now available to be streamed on all platforms including Spotify, Apple music, Amazon music, and Tidal. 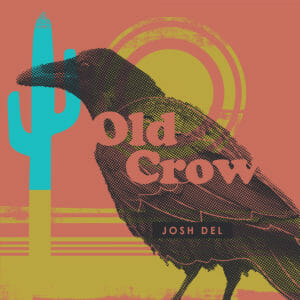