This is the Coachella Valley’s first facility to receive the highest-level award from the U.S. Green Building Council.

The Indio Law Building was recognized for its environmentally conscious design, and is Riverside County’s first facility to receive the platinum-level Leadership in Energy and Environmental Design certification, the highest-level award from the U.S. Green Building Council.

The 90,363 square foot, three-story office building provides office space for the county’s District Attorney, Public Defender, County Counsel as well as the Indio branch of the Riverside County Law Library is located at Highway 111 and Jackson Street in Indio.

“As one of the most efficient buildings in our inventory, the County Law Building leaves a smaller footprint on our environment by using energy and water more efficiently, while also generating significant savings on operations,” Fourth District county Supervisor John J. Benoit announced Tuesday. “I am very proud that this hugely successful project earned this prestigious rating, distinguishing it as a prototype of sustainability in our state.”

Some of the award winning design features of the new three-story Riverside County Law Building include a parking lot with roof-top solar panels that will generate about 40 percent of the building’s energy, high- efficiency plumbing, light-colored roofing to reflect heat, drought-tolerant landscaping and building materials made of recycled content.

The building which opened in February 2015, four months ahead of schedule and $2 million under budget is part of a larger criminal justice complex that will include the new East County Detention Center expansion, which has faced delays. Originally slated to open this month this part of the complex is now expected to open late in 2017. 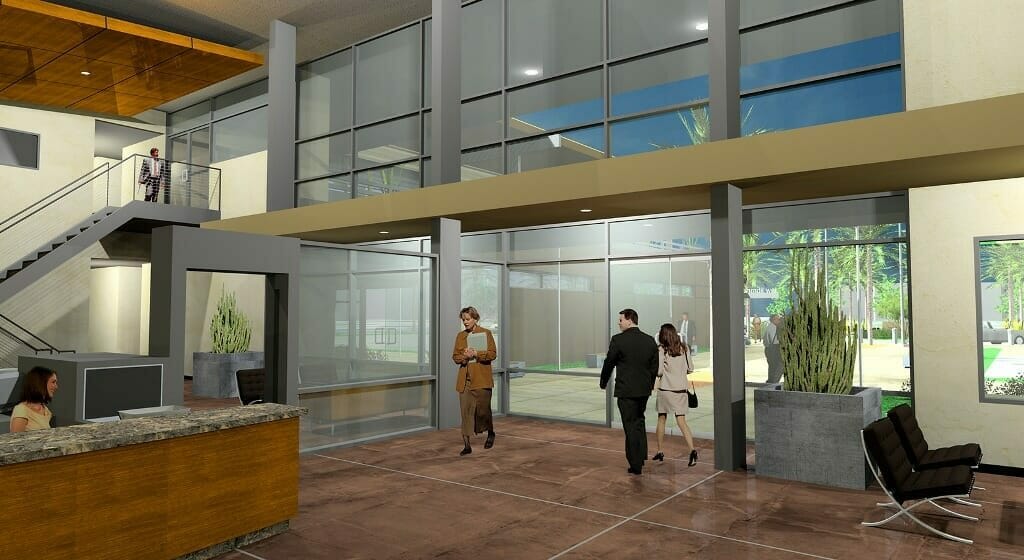 This design focused on creating a modern three-story, 90,000 s.f. building set in a campus style

Downtown Indio is evolving and the landscape is changing rapily as new county buildings are finished and start operating. “Not only do we have a full stop shop for the district attorney, the public defender and also the county council, but it is going to bring over $40 million when this whole community area is done by the county into the downtown Indio area, ,” said Mayor Pro Tem Glenn Miller.

“The economic boom that this is going to bring into the area is not just felt by having this beautiful building and the employees in it, but also as new patrons and residents come into our city. It is just really exciting,” Miller told The Desert Sun at its inauguration earlier in the year.