The History of Christmas Trees

The History of Christmas Trees

The evergreen fir tree has traditionally been used to celebrate winter festivals (pagan and Christian) for thousands of years. Pagans used branches of it to decorate their homes during the winter solstice, as it made them think of the spring to come. The Romans used Fir Trees to decorate their temples at the festival of Saturnalia. Christians use it as a sign of everlasting life with God.

Nobody is really sure when Fir trees were first used as Christmas trees. It probably began about 1000 years ago in Northern Europe. Many early Christmas Trees seem to have been hung upside down from the ceiling using chains (hung from chandeliers/lighting hooks).

Other early Christmas Trees, across many parts of northern Europe, were cherry or hawthorn plants (or a branch of the plant) that were put into pots and brought inside so they would hopefully flower at Christmas time. If you couldn’t afford a real plant, people made pyramids of woods and they were decorated to look like a tree with paper, apples and candles. Sometimes they were carried around from house to house, rather than being displayed in a home.

It’s possible that the wooden pyramid trees were meant to be like Paradise Trees. These were used in medieval German Mystery or Miracle Plays that were acted out in front of Churches on Christmas Eve. In early church calendars of saints, 24th December was Adam and Eve’s day. The Paradise Tree represented the Garden of Eden. It was often paraded around the town before the play started, as a way of advertising the play. The plays told Bible stories to people who could not read. 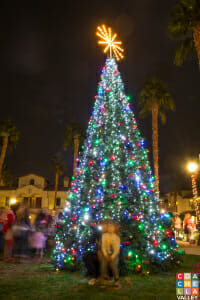 The first documented use of a tree at Christmas and New Year celebrations is in town square of Riga, the capital of Latvia, in the year 1510. In the square there is a plaque which is engraved with “The First New Year’s Tree in Riga in 1510”, in eight languages. The tree might have been a ‘Paradise Tree’ rather than a ‘real’ tree. Not much is known about the tree, apart from that it was attended by men wearing black hats, and that after a ceremony they burnt the tree. This is like the custom of the Yule Log. You can find out more about the Riga Tree from this website: www.firstchristmastree.com

A picture from Germany in 1521 which shows a tree being paraded through the streets with a man riding a horse behind it. The man is dressed a bishop, possibly representing St. Nicholas.

In 1584, the historian Balthasar Russow wrote about a tradition, in Riga, of a decorated fir tree in the market square where the young men “went with a flock of maidens and women, first sang and danced there and then set the tree aflame”. There’s a record of a small tree in Breman, Germany from 1570. It is described as a tree decorated with “apples, nuts, dates, pretzels and paper flowers”. It was displayed in a ‘guild-house’ (the meeting place for a society of business men in the city).

The first first person to bring a Christmas Tree into a house, in the way we know it today, may have been the 16th century German preacher Martin Luther. A story is told that, one night before Christmas, he was walking through the forest and looked up to see the stars shining through the tree branches. It was so beautiful, that he went home and told his children that it reminded him of Jesus, who left the stars of heaven to come to earth at Christmas. Some people say this is the same tree as the ‘Riga’ tree, but it isn’t! The Riga tree originally took place a few decades earlier. Northern Germany and Latvia are neighbors.

Another story says that St. Boniface of Crediton (a village in Devon, UK) left England and travelled to Germany to preach to the pagan German tribes and convert them to Christianity. He is said to have come across a group of pagans about to sacrifice a young boy while worshipping an oak tree. In anger, and to stop the sacrifice, St. Boniface is said to have cut down the oak tree and, to his amazement, a young fir tree sprang up from the roots of the oak tree. St. Boniface took this as a sign of the Christian faith and his followers decorated the tree with candles so that St. Boniface could preach to the pagans at night.

There is another legend, from Germany, about how the Christmas Tree came into being, it goes:

Once on a cold Christmas Eve night, a forester and his family were in their cottage gathered round the fire to keep warm. Suddenly there was a knock on the door. When the forester opened the door, he found a poor little boy standing on the door step, lost and alone. The forester welcomed him into his house and the family fed and washed him and put him to bed in the youngest sons own bed (he had to share with his brother that night!). The next morning, Christmas Morning, the family were woken up by a choir of angels, and the poor little boy had turned into Jesus, the Christ Child. The Christ Child went into the front garden of the cottage and broke a branch off a Fir tree and gave it to the family as a present to say thank you for looking after him. So ever since them, people have remembered that night by bringing a Christmas Tree into their homes!

In Germany, the first Christmas Trees were decorated with edible things, such as gingerbread and gold covered apples. Then glass makers made special small ornaments similar to some of the decorations used today. In 1605 an unknown German wrote: “At Christmas they set up fir trees in the parlours of Strasbourg and hang thereon roses cut out of many-coloured paper, apples, wafers, gold foil, sweets, etc.”

At first, a figure of the Baby Jesus was put on the top of the tree. Over time it changed to an angel/fairy that told the shepherds about Jesus, or a star like the Wise Men saw.

The first Christmas Trees came to Britain sometime in the 1830s. They became very popular in 1841, when Prince Albert (Queen Victoria’s German husband) had a Christmas Tree set up in Windsor Castle. In 1848, drawing of “The Queen’s Christmas tree at Windsor Castle” was published in the Illustrated London News. The drawing was republished in Godey’s Lady’s Book, Philadelphia in December 1850 (but they removed the Queen’s crown and Prince Albert’s mustache to make it look ‘American’!).

The publication of the drawing helped Christmas Trees become popular in the UK and USA.

In Victorian times, the tree would have been decorated with candles to represent stars. In many parts of Europe, candles are still used to decorate Christmas trees.

Tinsel was also created in Germany, were it was originally made from thin strips of beaten silver. But when plastic/man made tinsel was invented, it became very popular as it was much cheaper than real silver and also lighter to go on the tree!

One legend says that the Christ Child first made tinsel by turning spider’s webs into silver after taking pity on a poor family that couldn’t afford any decorations for their Christmas Tree!

Because of the danger of fire, in 1895 Ralph Morris, an American telephonist, invented the first electric Christmas lights, similar to the ones we use today. 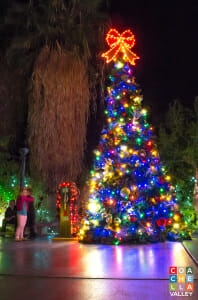 In 1885 a hospital in Chicago burned down because of candles on a Christmas Tree! And in 1908 insurance companies in the USA tried to get a law made that would ban candles from being used on Christmas Trees because of the many fires they had caused! So we have to say a big thank you to Ralph Morris for making Christmas safer!

The most lights lit at the same time on a Christmas tree is 194,672 and was done by Kiwanis Malmedy / Haute Fagnes Belgium in Malmedy, Belgium, on 10 December 2010!

Many towns and villages have their own Christmas Trees. One of the most famous is the tree in Trafalgar Square in London, England, which is given to the UK by Norway every year as a ‘thank you’ present for the help the UK gave Norway in World War II. The White House in the USA has had a big tree on the front lawn since the 1920s.

The record for the most Christmas trees chopped down in two minutes is 27 and belongs to Erin Lavoie from the USA. She set the record on 19th December 2008 on the set of Guinness World Records: Die GroBten Weltrekorde in Germany.

Artificial Christmas Trees really started becoming popular in the early 20th century. In the Edwardian period Christmas Trees made from colored ostrich feathers were popular at ‘fashionable’ parties. Around 1900 there was even a short fashion for white trees – so if you thought colored trees are a new invention they’re not! Over the years artificial tress have been made from feathers, papier mâché, metal, glass, and many different types of plastic (I’ve got a couple of inflatable trees!).

The tallest artificial Christmas tree was 52m (170.6ft) high and was covered in green PVC leaves!. It was called the ‘Peace Tree’ and was designed by Grupo Sonae Distribuição Brasil and was displayed in Moinhos de Vento Park, Porto Alegre, Brazil from 1st December 2001 until 6th January 2002.

In many countries, different trees are used as Christmas trees. In New Zealand a tree called the ‘Pohutakawa’ that has red flowers is sometimes used and in India, Banana or Mango trees are sometimes decorated.

You can decorate an online Christmas Tree in the fun section of the site!