Guthy Renker Announces they will be Closing their Palm Desert Offices

Guthy Renker, founded in 1988 by Bill Guthy and Greg Renker, is one of the largest direct marketing company of its kind, announced today it will be closing it offices at it’s Cook Street Headquarters.

Guthy Renker pulls in $1 billion plus a year from less than 20 different products, many you may know like Proactiv, Wen and Sheer Cover, to millions of consumers in over 60 countries.

Renker and Guthy, now in their late fifties, met nearly 30 years ago. Renker worked in his family-owned business; Guthy had an audiotape business; both loved motivational books.

With $100,000 in launch money, Guthy licensed the classic self-help guide Think and Grow Rich, by Napoleon Hill (1883-1970). Renker pitched in on the marketing end, relying on former NFL quarterback Fran Tarkenton to hawk an audio cassette version in a full-blown infomercial. “In baseball terms, it was a single,” grossing $10 million, says Guthy.

Today they made it official and announced they’ve decided to consolidate their California offices and relocate them to their Santa Monica location. About 55 jobs will be effected in the Coachella Valley according to a company spokesperson.

Although officially confirmed by email today, Guthy Renker, who’s founder Greg Renker lists his current residence in Indian Wells said the move out of the Coachella Valley will happen by 2017. 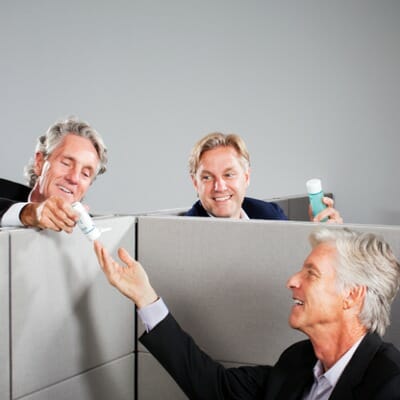