It was an afternoon filled with high spirits and talk of helping others. Daniel de los Reyes, an animated and passionate man about his music spoke excitedly about wanting to help others find their way into music, with the goal of teaching all who want it his experience and musical talent.

A three time Grammy winner, Daniel de los Reyes (or Danny as he likes to be called) currently plays with the popular Zach Brown Band, and has played with greats like Earth, Wind and Fire, Chicago, Yanni, Done Henley and many more. What an honor it was for those of us invited to Drum Concepts of Indio, for a glimpse into this successful drummer and percussionist’s idea’s and rhythms. 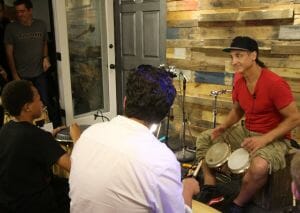 It was a standing room only session of the Master Class drumming events that Drum Concepts has been offering to our Coachella Valley percussion loving community.

A third generation percussionist, of Cuban and Puerto Rican decent, Danny was raised in New York and Los Angles, got his inspiration and talent from his famous Grandfather, Walfredo de los Reyes II,  and father Walfredo los Reyes SR. Danny’s grandfather was the founding member of the Cuban orchestra, Casino de la Playa.  His grass roots in Cuban and Latin music have developed him into a much sought out drummer and percussionist.

He takes his zeal, love and passion for music and wants to share them with all who are interested. Most interesting is his vision of creating a school on his property in Fayetteville, Georgia that will educate and motivate youth with music integration, training and appreciation via one of a kind rhythm programs.

Daniel de los Reyes spoke much about his vision and concept for a school that reflects his passion for music, zest for life and his hands on approach to everything he does. Not liking the term Master Class, this humble man spoke of his beliefs in equality, meeting new people whom he calls family and generously sharing what he has learned over the years. He is exuberant in his quest for sharing his ideas and experiences with everyone he meets.

This was obvious to me because at first meeting, he was shaking hands and talking in a way that made everyone in the room feel a part of. His excitement was contagious, many smiles and often a gentle hand on a shoulder to really get across his fervor. He had no pretense or arrogance sometimes expected by someone of his international caliber. His relaxed attitude reflected his being just another in the group; high on life, he spoke as if we’d been friends for a while.

I was particularly drawn in by his exuberance for the school he’s currently building called Day Glow. From conceptualizing to physically preparing the land, Daniel is tirelessly working to bring this vision to life. Day Glow will serve as the basis of a training center that will incorporate music, specifically percussion instruments as the main tool for his innovative youth development project. 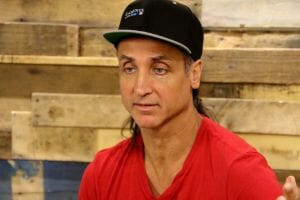 He states, “I have been blessed in my career and I would like to give something back to others interested in music.”

He showed us how much he wants to impart his experience to others by performing and educating us with detailed instructions of how he approaches percussion. He focused mostly on the children, drumming hopefuls and spoke in a kind and focused manner for all to understand. That is the mark of a superior educator; taking a topic one knows little or nothing about and making it simple to understand.

A music lover since the day I could hear and remember this writer and armature musician was able to learn many new things about rhythms and how to apply them to any type of music. After all, with Daniels eclectic experience with so many different styles of music it looked easy to take what he called “money beats” and understand how they cross over Latin, swing, jazz, rock, country and the like.

It was an amazing class and opportunity to hear him play. Let’s just say Daniel de los Reyes had us all on the edge of our seat. At the end of his presentation he gave all those who wanted to participate, a percussive instrument to play, with each person playing a beat. The poly-rhythmic exercise was accented by his outstanding style of mixing beats that made the variety of percussive instruments sound like a symphony with different notes and syncopation that made heads nod in unison.

The energy was contagious and entertaining beyond the imagination.

It was easy to comprehend what a great teacher Danny is and how many kids and people from all walks of life will benefit from his Day Glow project. Danny’s quest for expanding the horizons of all interested in his vision came from a series of like altering events that started him looking for the meaning of life. He searched deep within to arrive at the answer and attitude of a man humbled by the ups and downs of the music industry; developing a sense of community based on respect and the ability to what is right for others.

Daniel de los Reyes displayed no arrogance and in fact stated that arrogance was not a trait he cared for himself and those around him. He wants people to feel comfortable and accepted and is always open to ideas in an industry where many think their way is the only way to perform. 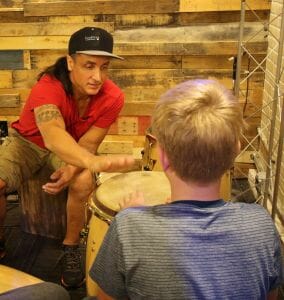 He showed us his invention the LP One Shot Shaker that only has one “live” striking area, enabling musicians to lay forward/down strokes without shadow or ghost strokes. Of course you had to have been there to get the full essence of this demonstration, but in my opinion this instrument makes the maraca obsolete.

Drum Concepts of Indio, headed by Kevin D. Smith put together this intimate and cozy event not soon forgotten by those of us honored to be a part of this experience. The day’s event was a kick off of Drum Concepts “Switch Kick” a quick release bass drum beater system.

Danny used this patent pending revolutionary percussive invention to accentuate his performance. Kevin will be having more Master Class events in the future and we can look forward to more accomplished percussionists coming to our humble Coachella Valley to listen to and be educated by the greats of our time.