Fluffy’s coming to the Coachella Valley! 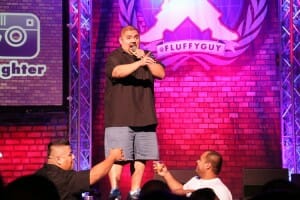 Much to our surprise earlier this week Gabriel Iglesias gave us a telephone call to talk Cars, Snakes, Food, Showbiz and hangin in the Coachella Valley.Gabriel, also known as the “Fluffy Guy” because of his size has lost over 100 lbs. recently and appeared on Arsenio Hall last week looking lean and mean. He just finished a successful run through Texas and was preparing to do a show in Tucson when he hit us up.

Many of you know he’s been coming out to the Coachella Valley on Cinco de Mayo for the past six years bringing his unique humor to the “Show” at Agua Caliente Casino ● Resort ● Spa.

Gabriel was so excited at the thought of returning to the Valley to perform and relax.

“I LOVE ♥ staying at Agua, they totally take care of me and the Spa’s to die for” he told me.

“Being able to hang with my buds in one place for 3 days is a dream every year.”

So when I asked him what else was on the agenda he quickly replied, ” In-N-Out Burger across the way, Karoake and maybe rolling down to the Bowling Lanes at Fantasy Springs (he has a 150 bowling average). Besides that you’ll find me in Agua’s Spa.” I could almost here him smiling ear to ear as he shared his paired down agenda.

I asked him if he still owned his original VW he bought as a kid (my son wanted to know). “No too much oil leaking and gas smell. I’m cruising a Tesla now. It’s fast (accelerates from 0 to 60 in 3.7 seconds) and I can go 250 miles on one charge.” he told me. I couldn’t help but ask how fast has he gone in the car. “I’ve done a 100 mph a couple times but as a family man I’m keeping it cool these days.” Gabriel admitted. He was stoked to hear the news we were getting a Tesla Dealership and Supercharge station in Cathedral City.

He shared about his career and how he was enjoying himself and just wanted to maintain the sweet spot he’s achieved. Despite making movies, doing some television shows, performing voice-overs and being offered a lot of opportunities, he is in love with stand up and connecting with his fans every night.

He loves the interaction with his fans so much he makes time after every show to talk and take photos and then posts the shots on his web page. If you go to his Twitter page or Facebook you will quickly learn your talking directly with Gabriel and not a hired hand.

I was totally surprised to find out reading his website that he doesn’t write any of his jokes down and practice off-stage. That’s what makes his show so good and every show unique and improvisational. He is a master story teller and his sound effects spot on 🙂

I also learned If you Google the word “Fluffy” Gabriel is at the top of the search results! He’s even listed before cats, bunnies, pancakes and omelets!.

He shared he has plans for touring Australia and Europe again soon and plans to continue doing Voice over work. He currently has a role in the movie Haunted House 2 which came out in theaters April 18.

When I asked him what’s something people wouldn’t maybe know about Gabriel Iglasias, He told me he owns a Boe Constrictor snake named Skittles. A fairly new addition to the family.

I got the sense the funny man was a consummate professional and focused. Working hard performing across America doing what he feels he was born to do: Entertain on stage live.

The Coachella Valley Team will be attending his 8pm show tonight and hopefully getting you guys some backstage pics with the Fluffy Guy himself!! Here’s the 411 on how you can join us:

Agua Caliente Casino Resort Spa will host funnyman Gabriel Iglesias at 9 p.m., Saturday, May 4th and Tickets go on sale May 2nd!. Gabriel, also known as “Fluffy” is best known for his hilarious standup act, but he found a degree of acting success as Tobias in Magic Mike. He’s even hosted his own showcase on Comedy Central called Stand-Up Revolution.