The worlds of golf and soccer will collide at the 2016 ANA Inspiration when the inaugural ANA Footgolf Faceoff tees off at 5:30 p.m. on Tuesday, March 29 at Mission Hills Country Club.

Tournament officials today announced that U.S. Solheim Cup stars Paula Creamer and Jessica Korda will join American soccer legends Abby Wambach and Julie Foudy in representing the USA  in the inaugural ANA FootGolf Faceoff. The American team will compete in a six-hole match against Japanese National Team legends Ayumi Kaihori and Yayao Kobayashi,Ayako Uehara of the LPGA and a golfer to be named by Monday.

The competition will take place on the Palmer Course, which is adjacent to the Dinah Shore Tournament Course at Mission Hills – home of the ANA Inspiration for the 45th consecutive year.

Admission to the ANA Footgolf Faceoff is free with parking available at the Agua Caliente Casino Resort & Spa. A complimentary shuttle service to Mission Hills Country Club will begin at 3:00 p.m. on Tuesday. 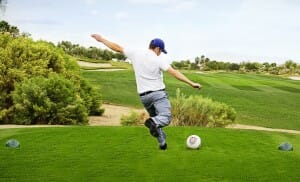 FootGolf, the hybrid sport where soccer meets golf, is played with a regulation soccer ball on shortened golf holes with 21-inch diameter cups cut into the greens. The rules largely correspond with the Rules of Golf. The American FootGolf League (AFGL), which is based in Palm Springs, will oversee the setup of the ANA FootGolf Challenge course and competition.

Here is a quick introduction to the sport if you have never heard of it, it’s pretty simple: