To be honest I was afraid.  I didn’t know exactly how the crowd was going to react. There were times when I questioned whether or not  I made the right decision – Serena Williams

The match took two hours and three minutes.  ESPN so aptly put …considering the emotional turmoil it exacted on Serena Williams[1], her mother Oracene and her sister Isha, all of whom were in tears afterward, and a crowd that seemed to feel the anguish of every errant shot and the relief of her eventual victory, it seemed more like 14 years.

It was a long buildup to Williams’ first trip back to Indian Wells since she left in 2001 amid accusations of racism, hurt feelings and eventual reconciliation. And it was a night as compelling as No. 68-ranked Monica Niculescu’s unorthodox forehand, which, combined with Williams’ emotions, conspired to make it a 7-5, 7-5 victory she seemed barely able to put in context afterward. 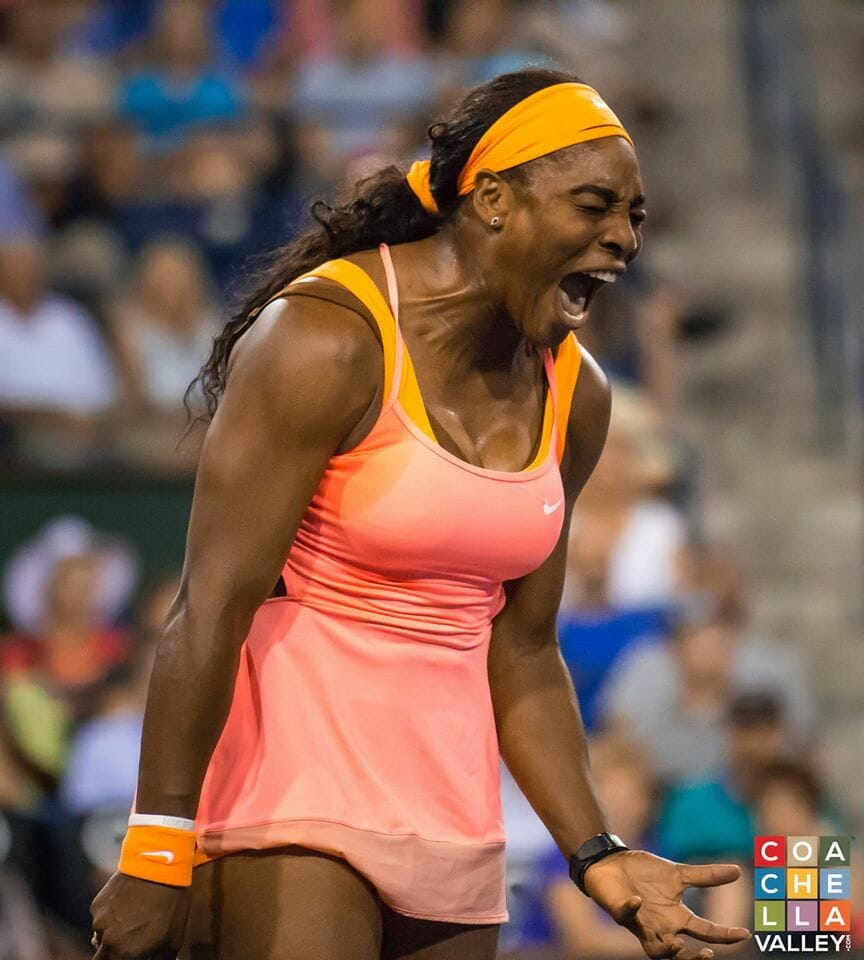 Serena Williams WINS in straight sets (7-5)(7-5) against Monica Niculescu of Romania to a sold out crowd including Larry Ellison, Bill Gates, and John McEnroe.

Tears flowed as Serena Williams left the court after a her 14 year journey that brought her back to the Coachella Valley to play in this year’s 2015 BNP Paribas Open.

“I feel like I’ve already won this tournament,” she said. “I don’t feel like I have to actually hold the trophy at the end of this. I feel like I’m already holding up a trophy. I have never felt that way before. I feel like just being here is a huge win. Not only for me, but for so many people. It’s a wonderful feeling.”

Serena Williams entered the stadium tonight (See the VIDEO of her entrance) to a rousing ovation and a cheering crowd that was on its feet, that welcomed her back with with a chorus of “We Love You Serena”

She embraced her fears, made the decision to return, wrestled with her emotions, doubts and hurt, and then faced the media Thursday night that was relentless in trying to get her to talk about exactly happened 14 years earlier. It all culminated in Friday’s “Triumphant Return” 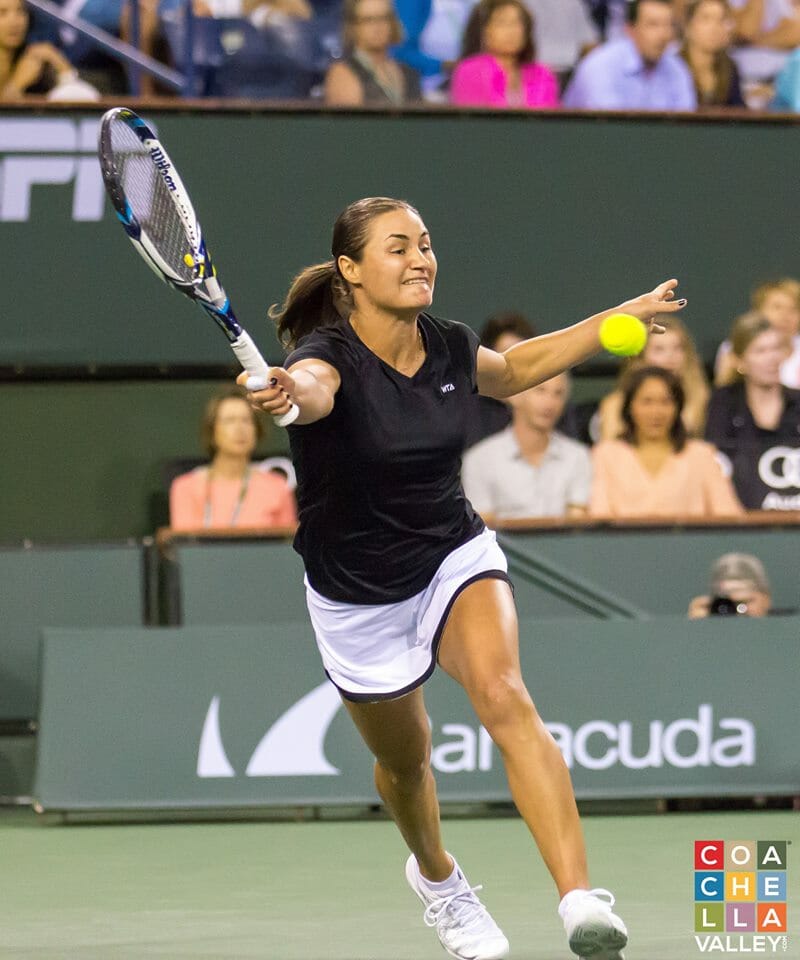 Serena Williams WINS in straight sets (7-5)(7-5) against No. 68 ranked Monica Niculescu of Romania to a sold out BNP Paribas Open 2015 crowd.

It wasn’t easy off the court nor was it Friday on the court. Serena found herself down 2-0 early and almost went down 3- 0 in the first set against a relaxed Monica Niculescu of Romania ranked No. 68 in the World. Serena would soon gain her composure pressuring her opponent on every point to go on to win the first set 7-5. The second set proved to be just as difficult, with Serena finally outlasting her opponent winning 7-5 and advancing to round 2.

Perhaps this first round match was a fitting challenge and struggle that put an exclamation point on  her 14 year journey to the Gardens tonight.  A new chapter and perhaps era for Serena Williams has begun right here in the Coachella Valley.

“This is one of my most significant matches of my career, ” Serena shared with us after the match was over.

BNP Paribas 2015 Serena Williams WINS in straight sets (7-5)(7-5) against Monica Niculescu of Romania to a sold out crowd including Larry Ellison, Bill Gates, and John McEnroe.

Asked if coming back while she is still a dominant player was important to her, Williams was clear, this could not be orchestrated. Nor would she want it to be.

“I think, ultimately, it was important,” she said. “[But] I didn’t write the story this way. I did not plan to be dominant and playing well or No. 1, if you say, 15 years, 14 years later.  “I did not write this story for myself, so I think it was just an extra bonus and an extra treat that it turned out this way.” 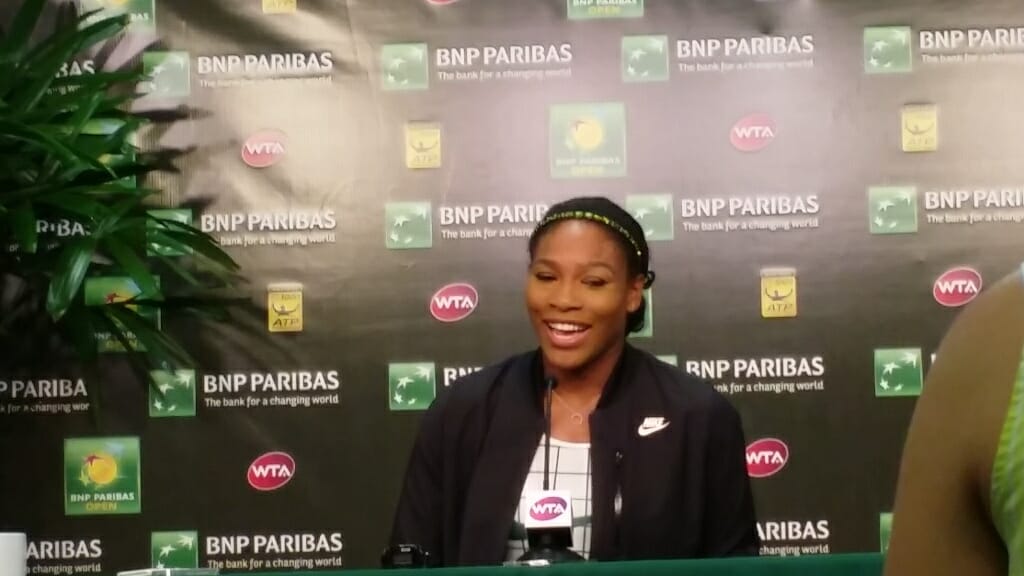 READ THE HISTORY, the Story behind the BNP Paribas Open, now the largest ATP in the world[6]