Exclusive Video Interview with the controversial David Černý, the Czech Creator of the “Babies” now crawling in downtown Palm Springs!

On June 5th, Hohmann and Grit Development officially unveiled one of David Černý’s largest and most famous installations in Palm Springs, the Černý “Babies”! 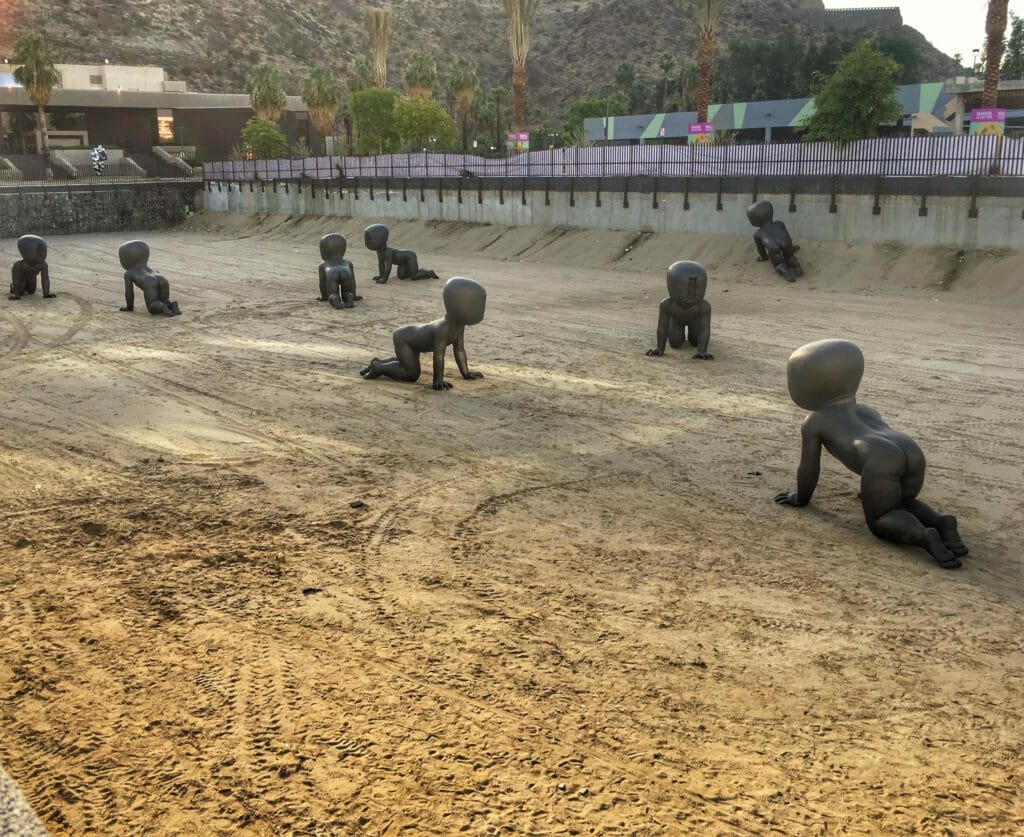 10 fiberglass babies, 11′ long and 9′ tall each weighing between 200 and 300 pounds, occupy a sand pit area behind the Kimpton Rowan Palm Springs and in front of the Palm Springs Art Museum dubbed the “Sandbox”.

The Ten 11′ sculptures traveled from Prague, via ship to the US, and are on loan from the artist to the City of Palm Springs for the next 2 years. In typical Černý style, these faceless “Babies” have been met with mixed reviews but have created a stir of conversation nonetheless.

In recent months, downtown Palm Springs has been reshaped by Braun with his development in front of the Palm Springs Art Museum that includes the Kimpton Hotel “The Rowan” and the future Virgin Hotel. Braun was intrigued by Černý’s work and funded the logistics of this ambitious project. The “Babies” are one of Černý’s best known installations. 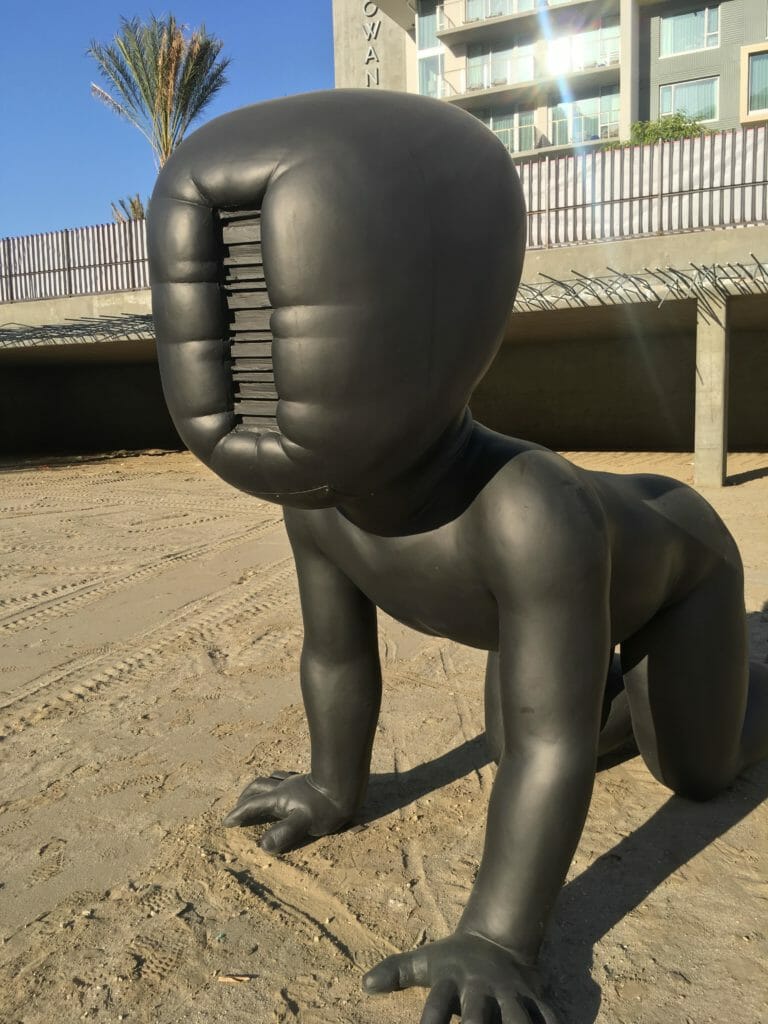 First presented in 1994 at the Chicago Museum of Modern Art, followed by appearances in various other cities including London, they have been exhibited all over the world. There are two permanent installations in Černý’s home town Prague.

Crawling up one of the city’s most prominent landmarks, the Žižkov TV Tower, Černý’s “Tower Babies” are without a doubt his most visible work. In 2000 – the year Prague was the Cultural Capital of Europe, Černý was asked to create a temporary project to honor the occasion, but due to the public’s appreciation of the babies, it was decided that they would remain. For a close encounter, three bronze babies are crawling in a corner next to Museum Kampa, the Museum of Contemporary Art in Prague.

The inspiration for the installation is deeply rooted in Černý’s concern for the dehumanization of society, a topic that is just as valid now as it was 30 years ago when he first conceived the idea of using the most precious thing to humankind, a baby, and replacing the face with a stamp of a bar code. Fascinating and disturbing at the same time, they have touched audiences around the globe. 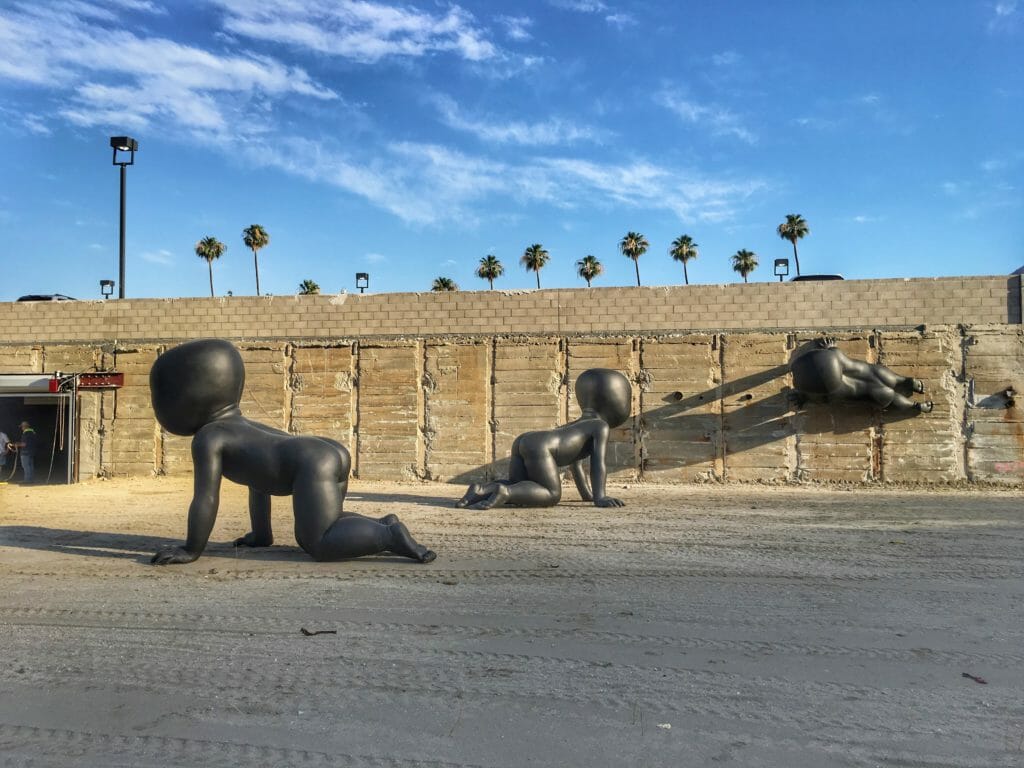 [3]“People will either love them or hate them. Černý is known to stir controversy and his installations are never mediocre. In any case this will add an international touch to the downtown development and draw interest to the otherwise empty space” says Christian Hohmann who represents the artist and organized the project.

Visitors are encouraged to share their pictures and comments on social media (#cernybabies).

PLEASE NOTE THE PUBLIC IS NOT ALLOWED TO PHOTOGRAPH IN THE SANDBOX FOR SAFETY REASONS. THERE ARE STILL LOTS OF PHOTO OPS AVAILABLE FROM ABOVE INCLUDING FROM THE ROOFTOP DECK OF THE ROWAN.

The installation site of the “Babies” is the future site of a residential building that will be developed in 2020/21. In the meantime, Michael Braun was willing to use the site for an art project. After meeting David Černý, who was in California to finalize the contract for another landmark sculpture in Santa Monica, the idea started forming to do something spectacular. Černý, who loves Palm Springs, subsequently agreed to lend one of his largest scale installations to date, “The Babies”. The ten alienlike fiberglass/steel sculptures traveled for several weeks by ship in two 40’ containers to Los Angeles and then by truck to Palm Springs, where they were moved into their final location by crane.

Hohmann Fine Art, the gallery who represents the artist, has created the website www.palmspringsbabies.com with more information about the installation and the upcoming unveiling and is sharing additional information on facebook and instagram as well.

David Černý first gained notoriety in 1991 when he painted a Soviet tank pink as a memorial to war in his native Prague. Since then his artistic acts of civil disobedience, grand scale installations, and exhibitions have continued to incite strong reactions worldwide. Creating extreme controversy with his work, this international sculptor has been described as “witty, exciting, kinetic, crass and provocative”

Černý is the son of a graphic designer father and a mother who was a restorer of art in the National Gallery of Prague. He learned his trade at the Academy of Applied Art in the country’s capital, studied in Boswil on a grant from the Swiss government, and also in New York City at P.S.I Artists Residence New York before taking part in the Whitney Museum Independent Study Program.

In 2005, he participated in the Prague Biennale 2 with his work “Shark” – a riff on fellow artist Damian Hirst, which consisted of an image of Saddam Hussein immersed in a tank of formaldehyde. Famously, in a stance against communism in 2015, Černý installed a 30-foot-tall purple hand on a barge in Prague’s Vltava River raising its middle finger in a “Fuck You” directly in front of the castle where Czech president Milos Zeman lived. His works are characteristically bold, courageous and reach into sensitive political, historical and social themes, all sprinkled with the unconventional artist’s sarcastic humor. 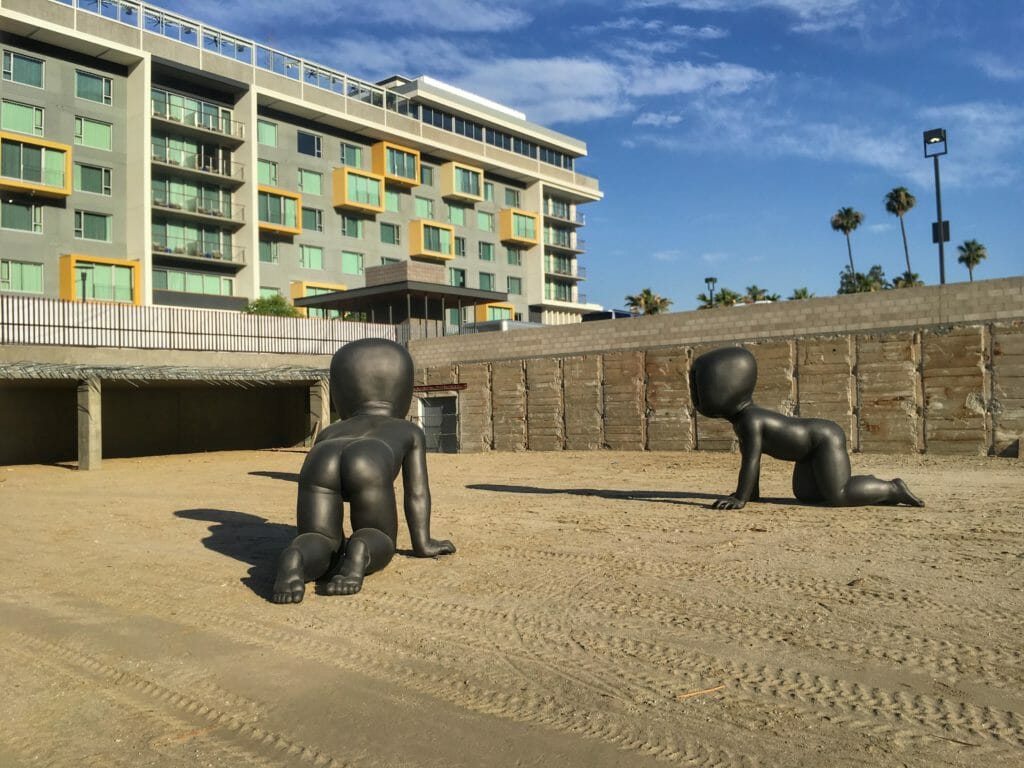 In his hometown of Prague alone, Černý has 14 installations in public spaces that have become major public attractions. In 2001 he created a non-profit cultural art and event center in a former 1920’s glass warehouse in Prague, which he named the “Meet Factory”.  Černý calls his factory a “multicultural supermarket”, as it houses a theatre, music stage and 16 studios occupied by a total of 30 international artists.

Many recent works were created through the artist’s proprietary and mind-boggling technique of casting three-dimensional objects from everyday life such as guns, tubes, tools, and light bulbs that emerge completely formed yet translucent as if on permanent x-ray. These items are then used in various ways, embedded in polymer resin, to either become subliminal constituents of an overall image, or as singular objects in a composition meant to impart a strong message. 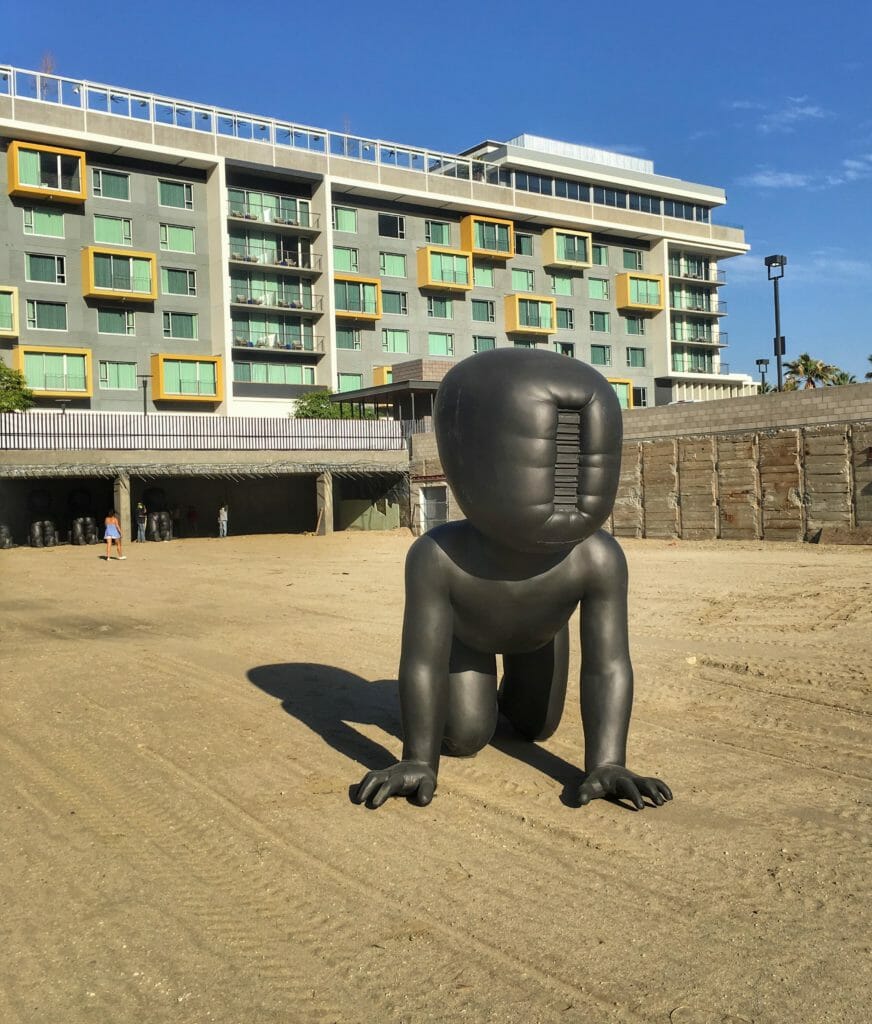 [6]Much like the recently installed “Babies” whose faces have been replaced with a bar code stamp to symbolize the dehumanization of society – a very troubling subject to the Czech artist.

Černý is known for his harsh and often crass criticism. It has landed him on the BBC list of the 20 most controversial artworks and in the headlines of many articles. Hohmann is pleased to represent the timeless, controversial works by an artist not afraid to investigate the political climate, war machine, and other social issues of our tumultuous contemporary times.