IN THE NAME OF LOVE; DIANA ROSS SINGS MORE THAN JUST THE BLUES

I was talking with my sister Renee last week and we agreed that you know you’re getting old when the songs you loved as a child are now being played on the oldies radio stations. I listen to what are now called oldies more often than not. I find that some of the modern stations play a top 40 that’s hard for me to grasp. Some of the music is really good, while others not so much.

I loved the music from the 60’s and 70’s and one of the stand-outs of that era for me is Diana Ross. I loved her with the Supremes and continued to love her when she went solo in 1969. Her music sang straight to my heart as if she were 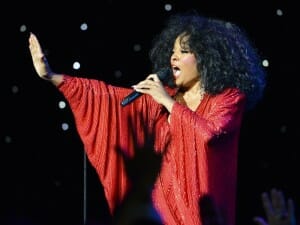 There was a media blitz, especially this last week, announcing her arrival to our thriving desert community at Fantasy Springs Casino. I listened with impunity for a week until I realized when would I ever have the chance to see her perform live again? I bought some tickets at the very last minute and off I went to see one of the musical icons of my youth and today.

Diana Ross’ In the Name of Love tour touched down for one night only here in our beautiful Coachella Valley and the show was nothing short of fabulous. Diana Ross has been performing for 5 decades and her stage presence showed it. She burst onto the stage with her hit I’m Coming Out and quickly segued into Love You More Today than Yesterday, originally recorded by Spiral Starecase.

I was immediately taken back to that 9 year old child who would rather listen to the radio than do anything else. Falling asleep with a transistor radio tucked under my pillow, the angst of pre-pubescence was quelled one song at a time and my Motown diva played a big part in that. More Today than Yesterday is truly one of my favorite songs of all time and after last night I like the Diana Ross version better.

Diana Ross went from one hit to another seamlessly. Her 9 piece band with 3 back-up singers was finely polished, every one of them uniquely qualified to play and sing. What made it stand out for me was the four piece horn section. It made the sound authentic and precise. Most people want to hear songs performed as they remember them. The band accomplished this with meticulous detail.

I was concerned before the show that at 70 years of age, Diana Ross might have lost some of her punch, but that wasn’t the case. I also wondered if she had to lip sync; don’t ask me why because now I don’t know why I’d ever think that. It was obvious from the first song that she was singing in her own voice; a voice that has changed very little from her recordings. S

he still has her powerful octave range and soft melodic tones. Pushing my way to the front of the stage, I got a glimpse of this timeless beauty before I was asked to go back and sit in my seat. Diana Ross looked to me like she has aged very little in the last 50 years. Diana loves the stage as much as she loves to change her outfits. I counted 5 costume changes that took minutes to complete.

I loved what she wore when she first came onstage; a silver sequined and lame’ gown. Raising her arms she looked like an angel, spreading her wings and inviting the entire world to come closer. She was the superlative songstress in real time that I imagined she was in my youth when I listened to her songs and watched her movies. I am no fashion blogger but I know a good wardrobe when I see it and Diana Ross pulled off each change with the continuity, ease and grace. 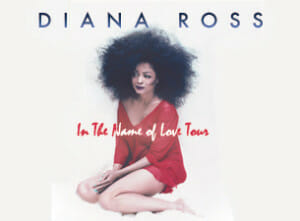 [2]She owned the stage from her first song to the last, mesmerizing everyone there. I often glanced around the audience to observe their reactions to the music. If people weren’t on their feet dancing, they were swaying in their seats, entranced and enveloped in the sweet, sweet, music. One of Diana’s last songs was a personal favorite of mine; Ain’t No Mountain High Enough. Apparently everybody in the audience felt the same way. When she began to sing this song, every person in the sold out event jumped to their feet. I was already there.

I don’t know why I paid for a seat because the minute she came onstage I was up and never sat down again. Diana Ross has recorded 70 hit singles. Was I being selfish expecting her to sing every one of them? Perhaps in earlier days that would have happened but alas, this show was only 1 hour and 15 minutes. Yet, in that short period of time I had the absolute privilege of seeing one of the greatest female singers of all time; flawless and sophisticated. The show was high energy and Diana Ross is a fireball who’s never lost her edge.

I watched a video of Diana online this morning. She said if she had to live her life over, she wouldn’t change a thing. What a life this amazing woman has lived. In the span of an hour, I was transported back to my youth and into my grown up life, feeling wistful and oddly complete. If you have the chance to see Diana perform in her In the Name of Love tour, take it. You won’t be disappointed in the least and maybe for just one moment you’ll be taken back in time when life was a much different animal than it is today.