DEATH VALLEY JIM; A TESTAMENT TO THE GOOD LIFE

Exploring the desert full time for the past 3 years, Death Valley Jim has found the time to write 8 books on his findings; adventuring at times for 2 weeks or more deep into places that most of us will never see. 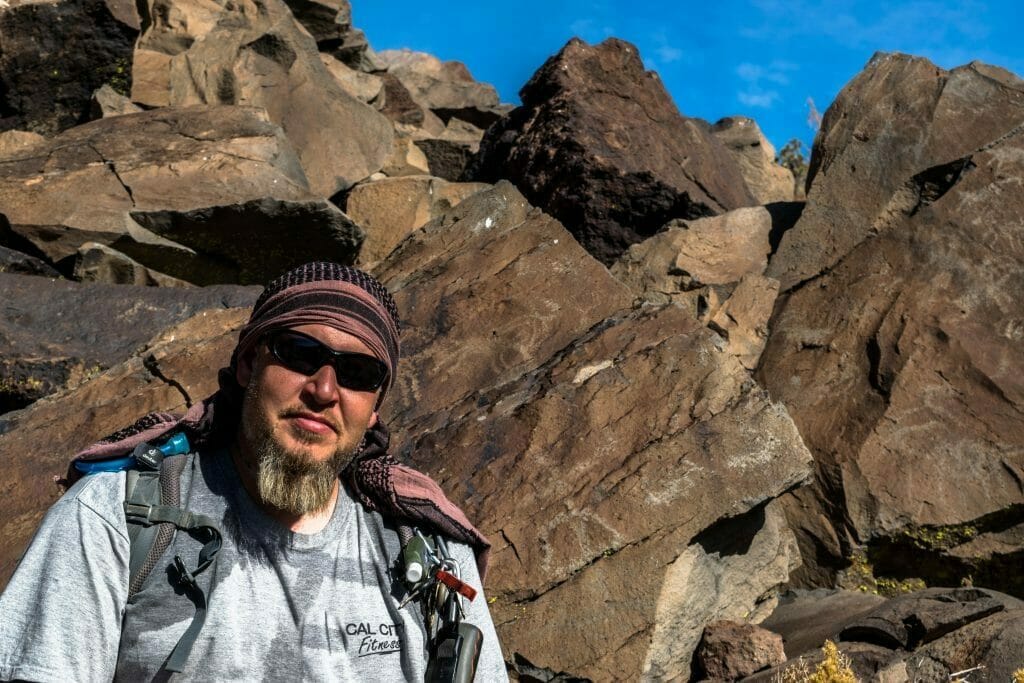 How many of us have wished that we could live our lives in a way that our careers are our passion? We’d stop speaking of boring work weeks, with punching a time clock a thing of the past. A testament to a good life is choosing the life you want to live; living your wildest dreams that include how you choose to make your living.

An author, guide, explorer, photographer and radio personality, Death Valley Jim has done just that. Each one, a career by itself, stems from his love and respect for this beautiful desert we live in. He has been exploring the Mohave Desert and Joshua Tree National Park for over 7 years. His expeditions became his calling; to educate the public on what’s out there, with an eye on safety and respect for this hearty yet fragile environment.

Exploring the desert full time for the past 3 years, Jim has found the time to write 8 books on his findings; adventuring at times for 2 weeks or more deep into places that most of us will never see. He has documented in his 5 part series Secrets of the Mohave Desert, vol. I-5, many desert treasures he has come upon in his travels. Jim has also documented many petroglyphs and pictographs, also called native rock art for his readers.

“A testament to a good life is choosing the life you want to live; living your wildest dreams that include how you choose to make your living” 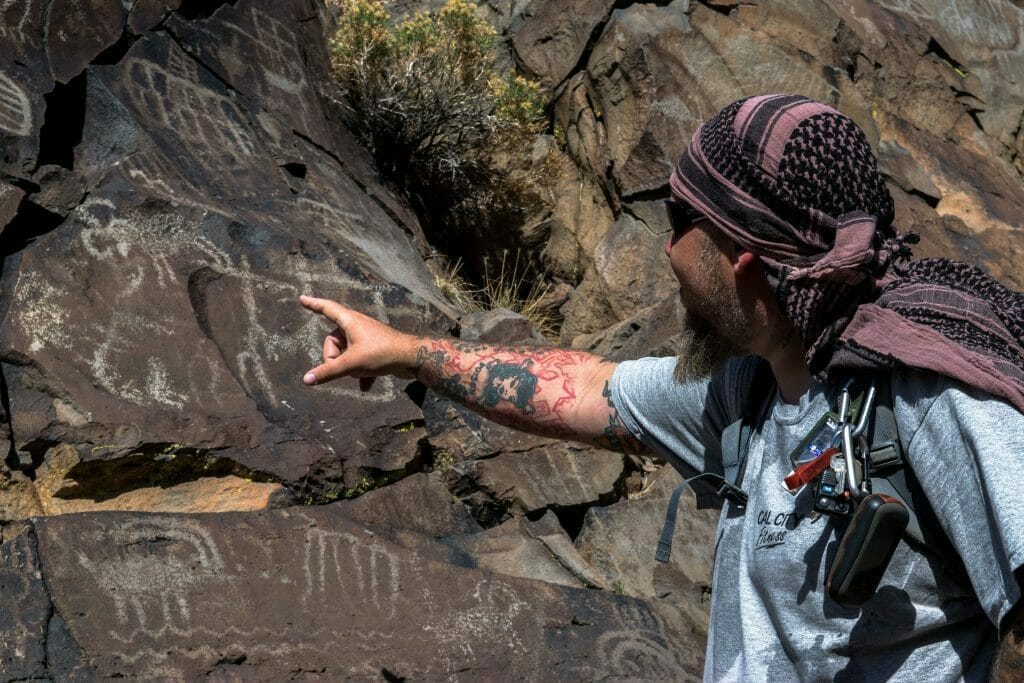 Jim points out a number of ancient petroglyphs, which may be thousands of years old

A petroglyph is a picture carved into stone and a pictograph is painted on them using pigments. Petroglyphs and pictographs can be traced to desert tribes of Indians as far back as 4,000 years. He found a pictograph in Joshua Tree National Park a while back that has never before been documented. Reporting this to park Rangers, Jim said with a laugh, “They acknowledged pictographs in that area have not been recorded, but they didn’t seem to care.” Rock art has been a form of conveying information for Native American tribes from boundary markers to guides to food and water resources.

For archeologists, native rock art is utilized to trace the roots and identities of tribes that have inhabited the desert long before the settlers moved in. Jim has written “Analyzing Rock Art in the Mohave Desert” on this topic as well as the pictorial “Rock Art of the Upper Mohave Desert.”

When preparing for a trip, Death Valley Jim studies topographical maps of the areas he plans to visit and uses satellite imagery to receive visual information needed for navigating and finding water sources. He packs more than enough food for each trip. Jim told me, “I’m really good at survival and I’ve rarely run into harmful situations. However, one time I fell 20 feet while climbing a waterfall, landing on my back. After laying there for a few minutes, I shrugged it off and walked away with no broken bones.”

“On another trip in the Mohave National Preserve, I was caught in a flash flood. While I managed not to get washed away, I found my brand new jeep in the middle of the flood. It was buried in sand and there were boulders surrounding it. After spending some time digging it out and moving huge rocks, I was able to drive away.” After cleaning out the inside and out of mud and rocks, he happily reported there was no damage.”

“I’m really good at survival and I’ve rarely run into harmful situations. However, one time I fell 20 feet while climbing a waterfall, landing on my back”

Doing no historical research before his explorations, Death Valley Jim prefers to see the sights without outside influence. The historical research comes after he documents his finds. For safety, Jim uses an emergency beacon called a “spot.” The spot can satellite text the coordinates of his whereabouts. The spot also has a help button in case of a 911 emergency that alerts rescuers to his exact location. Gratefully he has never had to use it; instead he sends satellite texts of gps coordinates to his wife who monitors his trips for safety. 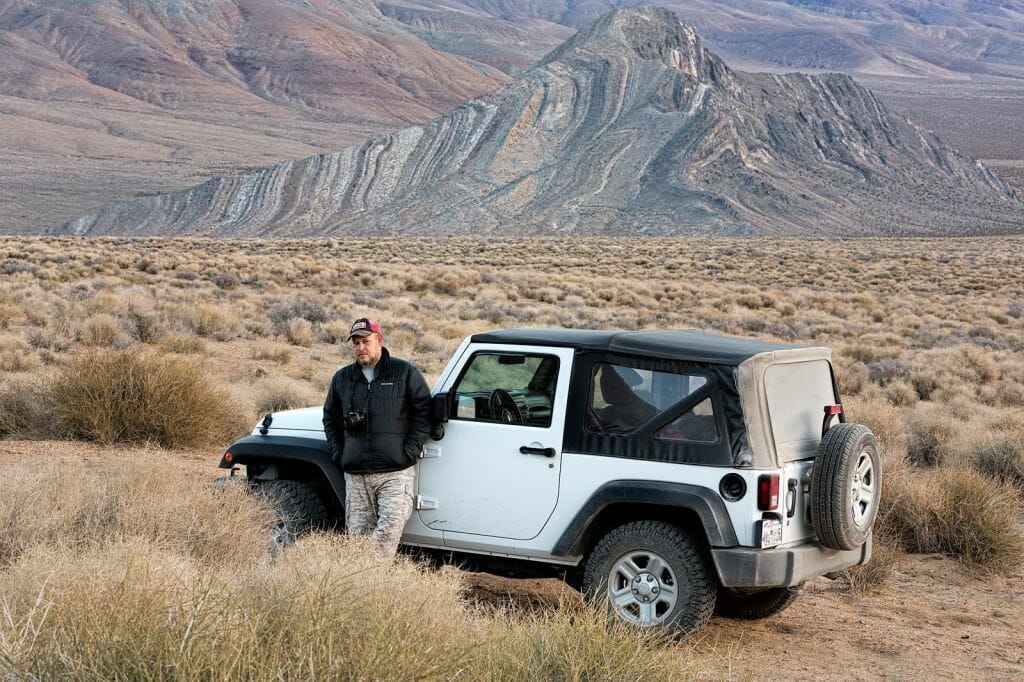 Jim and “White Lightening” in Butte Valley. Striped Butte can be seen in the background (Death Valley National Park)

He is adamant that every desert traveler should have a spot in their possession every time they go out, but cautions never to rely on them solely. “ If you’re going out into the desert, you need to be prepared in every aspect; food, knowledge of water sources, maps and proper gear.” When asked if he took others with him, Jim said, “I have at times taken people with me, but I really prefer to go alone. The sheer solitude and wonderment of the desert is best at one’s own pace without being delayed by people who have a lesser skill set” How many of us, on a mission to get somewhere, want to wait for people to catch up? 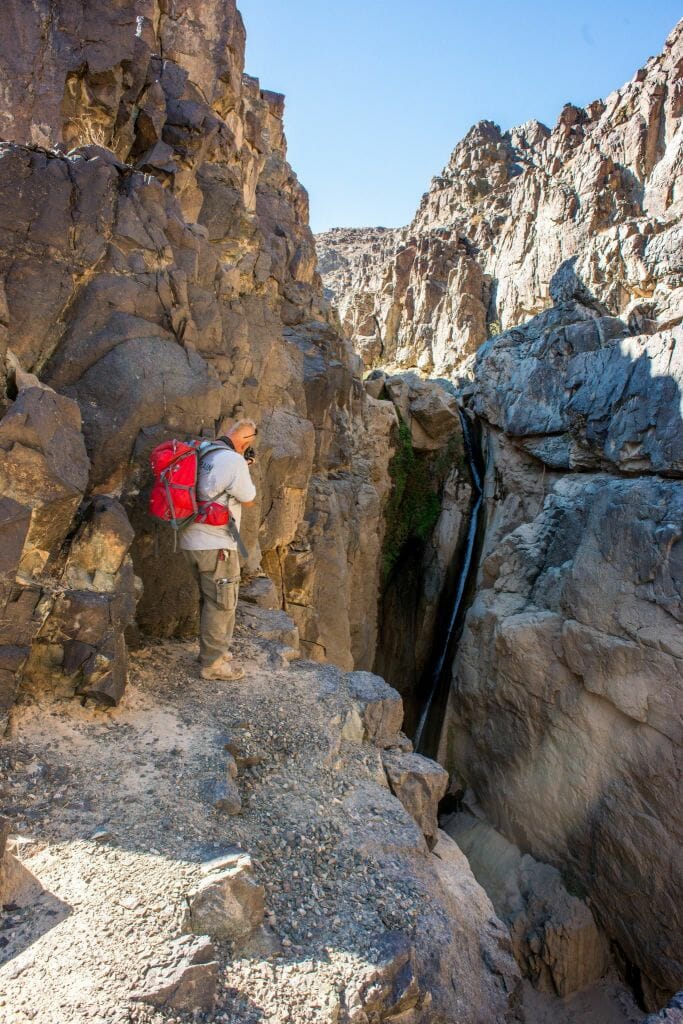 The winter season is Jim’s time for hibernation from undertaking long trips. Like a lot of us, he says it’s too damn cold. He utilizes this time of year for his guide service for photographers and people interested in seeing hidden spots in Death Valley. Recently he used his guide services to assist The Band Perry who was shooting a musical video in the park. The Band Perry is the number one country artist in the nation right now. Jim’s job was guiding the band and crew to places to shoot the video and to make sure the project was done safely. What better person to have on your team at a time like this? The band made a video of Glen Campbell’s song, “Gentle on my Mind.” It’s one of my favorite songs of all time and I can’t wait to hear the remake. Jim has also worked with many documentary filmmakers, acting as a guide and making sure everyone gets in and out safely.

Jim shares his love and passion for the desert on his popular radio show every Saturday between 8-9 am on KPTR 1450 AM, Palm Springs. For hi-desert people the show can be accessed on the web at www.KPTR1450.com. Jim says, “The show is all about the people and places of the desert. Each guest is knowledgeable about the topics discussed; everything from desert tales to folklore, archeologists and Native Americans. “I want to have an impact on my listeners by giving them information and knowledge they can use.” The show is up for syndication and Jim hopes to reach more listeners so they too can experience his passion and knowledge of the captivating, untouched areas of the desert he’s come to know intimately.

Death Valley Jim got his name from his wife. She has been his support system when he goes out by making sure he’s on target with his plan. Anything out of the ordinary, especially not receiving his daily satellite texts, will alert her to potential emergencies. Death Valley Jim is a highly experienced desert traveler and survivalist. He says, “Many inexperienced hikers go out into the desert and never come home; about a handful every year.

My advice to would-be desert explorers is to be safe about everything and always be over prepared. The desert is never to be taken lightly. If you’re not hiking on established trails, know where you’re going! Reality survival shows give people a false sense of knowledge, inspiring them to attempt things they really have no idea about until it’s too late. Those shows are basically fake and misleading.” Jim has auditioned for casting calls on some of these shows and has always turned them down because of their inauthenticity. “When the casting people call now, my answer is don’t call me anymore.”

In Jim’s opinion, you could spend 20 lifetimes in our desert area and never run out of places to explore. For most of his discovery missions he’s stayed between Bishop and Joshua Tree. Occasionally he branches out to Utah and Arizona. For Death Valley Jim, the ultimate outcome for all his hard work these past 7 years is to do what he’s doing now; sharing his love, passion and stories of the desert. His goal is to educate people about the desert, how to respect it and not destroy it. 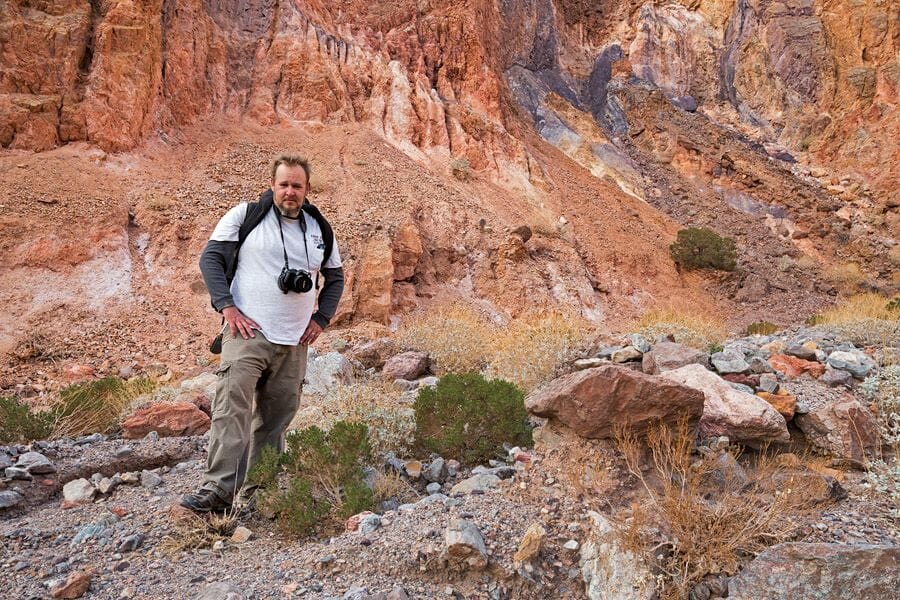 If you’re interested in finding out more about this extremely interesting man he has a blog at www.deathvalleyjim.com. This polished website gives its readers the opportunity to really get the essence of life and exploration in the desert. It outlines safety tips, edible desert plants, where to go and you can access his taped radio shows. Jim is an accomplished writer and story teller. You must read his blog to get the heart and soul of this man, his thoughts, experience and wisdom.

So many of us have big love for the shear expanse and stunning views the desert offers every time we step outside. Death Valley Jim has given us a telescopic view with his literature, photographs, blog and radio show. Get to know this seductive wonderland on an intimate level by checking out what Death Valley Jim has to offer. You won’t be disappointed.