Could you soon send divorce papers over Facebook? Judge makes it Legal!!

In a landmark ruling, Manhattan Supreme Court Justice Matthew Cooper is allowing a nurse named Ellanora Baidoo to serve her elusive husband with divorce papers via a Facebook message.

That may soon be the case. Recent court decisions have allowed Facebook users to send legal documents over the social media website when the recipient cannot be contacted in person, which could be a sign of the times when it comes to serving legal papers to people through digital means.

One of these decisions came in April when a Brooklyn woman received a judge’s approval to serve her divorce papers over Facebook,[1] The New York Daily News reported.

The woman, Ellanora Baidoo, “is granted permission (to) serve defendant with the divorce summons using a private message through Facebook,” the judge ruled, according to the Daily News. “This transmittal shall be repeated by plaintiff’s attorney to defendant once a week for three consecutive weeks or until acknowledged” by the missing husband, Daily News reported. 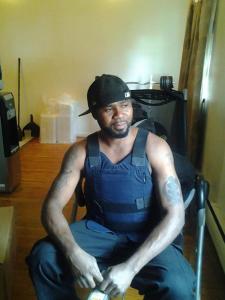 Via Facebook – Victor Sena Blood-Dzraku, seen in a Facebook photo, apparently has no fixed address and has only kept in touch with his wife by phone and the social networking site.

The husband, Victor Sena Blood-Dzraku, has been missing since 2011, when he vacated his apartment in New York City, the Daily News reported.

Blood-Dzraku and Baidoo, who are both from Ghana, got married in a civil ceremony back in 2009. Blood-Dzraku promised to have a Ghanian wedding ceremony in addition to the civil ceremony, but he canceled those plans, which caused friction in the marriage. The two kept in touch through Facebook and phone calls, but never saw each other in person after that, the Daily News reported.

Because Baidoo can’t physically give her divorce papers to Blood-Dzraku, the judge ruled she can serve them over Facebook.

But this isn’t the first time families have turned to Facebook for help serving legal documents. Back in September of last year, Noel Biscocho of Staten Island wanted to serve his wife legal papers that stated he did not want to pay child support for his 21-year-old son,[3] the New York Post reported. When he brought these papers to his wife’s home, she had already moved out and didn’t leave a forwarding address, NY Post reported.