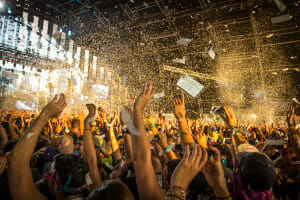 INDIO,CA – As if two straight days of audible mayhem wasn’t enough lets do it one more time! Sundays at Coachella start out quite similar to this particular day.

Thousands of sun baked fans creep out the tents slightly later. Enter closer to 3. Seek shade until sunset then.. BOOM. Now we’re not saying that a high percentage of fans are go go go till the last note but Sundays always seem a little more relaxed till that sun sets. “We must conserve our energy for Alesso” said a group waiting to give the beat master the full attention he deserves. From a Motorhead Reunion to Calvin Harris, and Arcade Fire soon to perform its almost as if the fans know who they’re willing to give the last bit of 100% they have left. And they did. You know you did.