Charles Evered knows a thing or two about Characters and the Coachella Valley Life.

Bi-coastal award-winning playwright, director, screenwriter, and moviemaker Charles Evered knows a thing or two about Characters and the draw of the Coachella Valley Life.

I think it was about a decade ago when I sat in Professor Charles Evered’s screenwriting class at UCR Riverside’s Palm Desert Campus[1]. Chuck, and I became friends meeting after class, grabbing coffee and talking a lot about the business of filmmaking.

He was already an award winning playwright and at the time working on a script for the hit TV Series Monk[2], but even then he shared how he longed to see and hear his characters on the big screen.

I recall a night we went to see Borat, the movie at the River in Rancho Mirage.  I didn’t particularly like the movie, but I couldn’t get over Chuck being engrossed in Sacha Baron Cohen[3] character, Borat Sagdiyev, a fictitious Kazakh journalist travelling through the United States recording real-life interactions with Americans.

Chuck was laughing out loud like a big kid and really getting into it.  It took me by surprise. Generally I knew him as a conservative, family man who held morals and values high on his list.  But that’s the night I saw an accomplished professional studying and still learning about character development and dreaming about bringing his own to the big screen.

“I always come back to write in the desert.” Charles Evered

I spent some time with him and his family back in his hometown in New Jersey, near Princeton University, while he was working on casting for the New York Premiere of his play ”Adopt-A-Sailor”.[4]

For casting we travelled from Princeton to New York City and entered a non-descript building, that just happened to have an auditioning stage, on the second floor, from which countless men did cold reads for Chuck to try and earn the part of the young Sailor. If I recall, at one point in the day I even tried to audition. I didn’t get the part.

On our way to the auditions we stopped by a Manhattan Starbucks. When we entered I heard “Chuck”, “Chuck” and there, all smiles was Liev Schreiber [5]no less.  They exchanged pleasantries and talked about family and kids in the 5 minute encounter.

It was brief since Liev Schreiber was headed to his own audition down the street.  It so happens Liev is Godfather to Chuck’s son John. I couldn’t believe it. He had never shared such a thing and here we were having espressos in the Big Apple with Liev… 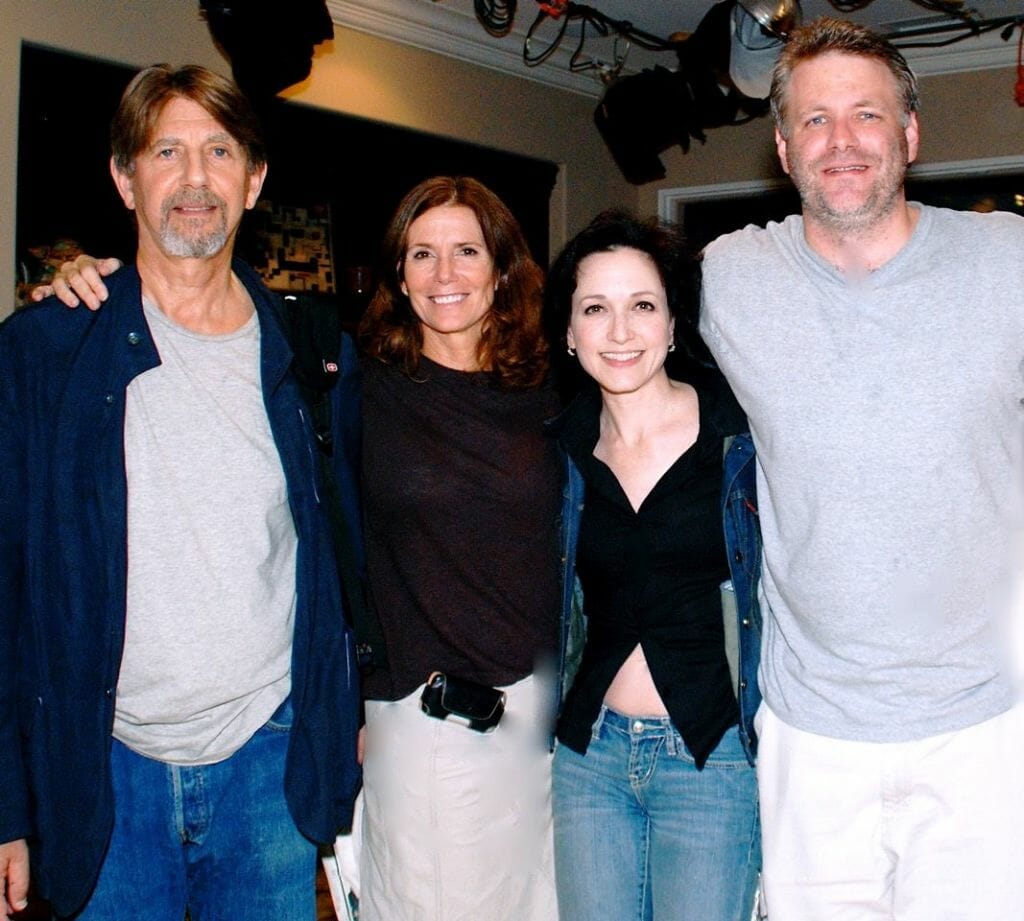 Since those days “Adopt-A-Sailor” eventually became his first work adapted into a full length featured movie written and directed by Evered and produced right here in the Coachella Valley by Kim Waltrip and Wonderstar Productions.

*Adopt a Sailor*, the Movie[7], starred Emmy winners Peter Coyote and Bebe Neuwirth and a relative newcomer Ethan Peck. Peck is the grandson of Gregory Peck. *Adopt a Sailor* went on to screen at more than 20 national and international film festivals and premiered on Showtime.

His next feature as a director, *A Thousand Cuts[8]*, starred Academy Award nominee Michael O’Keefe, premiered at the Palm Springs International Film Festival[9] and was nominated for a Saturn Award by the Academy of Science Fiction, Fantasy and Horror Films.

His latest film, a short, *Out*[10] (2014) starred Gloria LeRoy and had its world premiere at The Newport Beach Film Festival.

Evered’s work has been profiled in the New York Times, BBC World and on NPR, among other outlets. He is a former officer in the United States Navy Reserve, having gained the rank of Lieutenant.

Chuck and I have been fortunate to remain connected through the years and were once again reunited over a cup of coffee. This time back in the Coachella Valley at the River Starbucks, in Rancho Mirage. 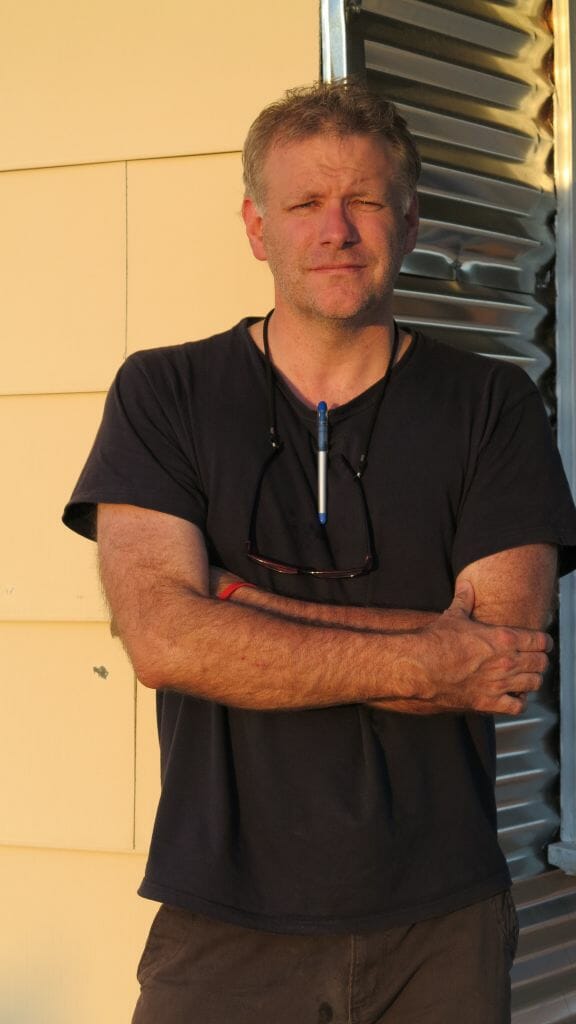 *What first brought you out to the Coachella Valley? *

I was a founding faculty member of the small UC facility on Frank Sinatra and Cook Street. It was 2005, and I taught there for a year. It was the first time I really experienced the beauty of the place and what a creative inspiration it is. My family’s main residence is Princeton, New Jersey, as the kids are settled in school there—but since I come back and forth to Cali for work, I’ve found myself all over the place — renting in La Quinta, subletting in Palm Desert, buying, renovating and selling a little cabin in Joshua Tree. I feel I’ve really gotten to know the area and feel lucky to have lived all over the place that way.

*What kind of work resulted from your being in the desert? * It was in the desert that I met producer Kim Waltrip. Kim and I worked on *Adopt a Sailor* together– then shot another feature called *A Thousand Cuts.* I’ve always found the communities in the desert to be very supportive toward artists.

*What’s your favorite place to eat in the desert?* Keedys, for sure. I love the history there, and it reminds me of some cool East coast joints I know. As for up the hill, I really enjoy hanging out at Pappy and Harriets in Pioneertown, seeing a band and eating those burgers.

*What do most people get wrong about the desert? * I think a lot of people think of Palm Springs as just sort of  “old Hollywood glitzy,” when in fact there are a lot of active visual and performance oriented artists all over the place. In the valley, and up the hill in the hi-desert.

*What’s the name of your company, and how did it come about?* I started my production company in 2010, and it’s called Ordinance 14, after a brief scene in one of my favorite Clint Eastwood movies called *Unforgiven.*

*What are your favorite desert memories?* The people—making a lot of friends, the hiking, the natural beauty of the place. No matter how long I find myself away from it, I always come back to write in the desert.

*What are you working on now?* Right now, we’re focusing on three projects. One is setting up the feature script I co-wrote called *Back*. It’s an adventure road movie about a young returning vet who finds himself on the run with a high school prom queen.

*Back* means the world to me, because it concerns our veterans and the way they’re treated when they get back from serving and sacrificing so much.

The second project is still in the writing stage— a film adaptation of my play *Class*, which is having its LA premiere March 18, at Garry Marshall’s Falcon Theatre[13]. My plan is to make *Class* on the same scale I made *Adopt a Sailor*, and to hopefully attract the same level of stellar actors.

Both of these film projects are close to my heart and passion projects.

Charles Evered Play “Class,” will premiere at The Falcon Theatre in Los Angeles on March 18, produced by renowned director Garry Marshall[14]. Performances continue through April 19. The Falcon Theatre was founded by Marshall, best known for having directed the films “Pretty Woman,” “Valentine’s Day” and “The Princess Diaries.” Marshall was also responsible for the iconic television series “Happy Days,” “Mork and Mindy,” “Laverne and Shirley” and the television adaptation of “The Odd Couple.”

“Class” tells the story of Sarah, a young Hollywood starlet seeking lessons from Elliot, an esteemed acting teacher in New York City. In the course of their work together, they learn more about themselves than the craft – and in doing so change each other’s lives forever. Evered, who is the artistic director in the UCR Department of Theatre, Film and Digital Production, notes that the play is about mentors and how people can have a positive or negative effect on a young person’s journey. 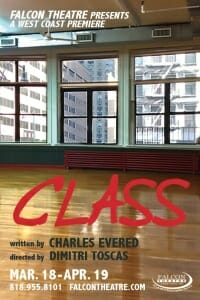 And finally, for the theatre, I’m writing a new adaptation of Dicken’s “A Christmas Carol” –only my version is called “An Actor’s Carol,” and it’s about a burned out actor who has played Ebenezer Scrooge one too many times, is kind of losing it–  and is visited by some crazy spirits of his own.

*What is it about stories concerning veterans and war that seems to attract you? Is it because you served or are there other reasons? * Well, to me it’s the story of our times. I’m not a big fan of naval gazing stories. I like action, and I like stakes in movies and I can’t imagine any other arena where the stakes are higher. I also don’t like the way service members are often depicted on screen, and I’d like to counter that somewhat.

I thought we did a good job with that on *Adopt a Sailor,* and I thought *American Sniper* was brilliant and set the bar where it should be. But most of the movies made about veterans are so overtly partisan and preachy and such overwhelming downers, I can see why most of the films coming out of Hollywood didn’t work in the last 12 or so years. It’s because the town had preconceived notions, and it wasn’t to tell the stories of the vets, it was to use the vets and their experiences as mouth pieces to broadcast their own agendas. I don’t think that’s okay.

*The play adaptation sounds fun, what inspired “An Actor’s Carol?” * Well, I know almost every theatre does *A Christmas Carol* whether they want to or not, and I know it’s a money maker for most venues, so I kind of wanted to look at it from the point of view of the people performing it year after year. And also to give theatres an option to program something that is different, but still retains the same heart and sweetness of the original story. I also just wanted to write something lighter, and more fun. I need a break from the heavy stuff sometimes.

*What’s your next adventure in the desert?* Well, hopefully I’ll be shooting one of those projects around there before long, but when I’m not on set, I’d like to learn to fly and I know there are some small desert airports that can make that possible. I wouldn’t mind flying all over that beautiful area. See it from a whole ‘nother point of view. If I could just direct films, write plays and fly planes for the rest of my life, I’d be a happy man.

*We appreciate your time! And if our readers want to learn more about your work or to get in touch with you somehow, how might they do that?* Best way is through the website: www.CharlesEvered.com[16]. Thank you very much!