Coachella Valley, California: the ultimate resort to switch off

Anthony Horowitz checks in to Palm Springs, California’s desert playground – and finally manages to relax while away

Even when I go on holiday, I’m never on holiday. My work follows me everywhere. If I’m travelling, it’s usually for research, to meet people or to produce articles such as this. I write on the plane, on the beach and in my hotel room. And my wife (a television producer) is just as bad. Put her in the most luxurious resort and she will sit there with her eyes glued to her iPad, firing off emails and scrutinising her next script.

Palm Springs was no exception. The two of us went there to meet Herman Wouk, the legendary, Pulitzer Prize-winning author of The Winds of War, Marjorie Morningstar and many others. We were hoping to persuade him to let us make a 10-part television series out of his wonderful novel The Caine Mutiny. It’s the story of a minesweeper during the Second World War and its tyrannical psychotic commander, Captain Queeg – a part played by Humphrey Bogart in the 1954 movie and by Charlton Heston on stage. Wouk had made it clear that he was reluctant to part with the rights but agreed to see us, having watched a few episodes of Foyle’s War.

We were seeing him on Monday morning and decided to spend a long weekend at “California’s ultimate desert playground”, as Palm Springs is described in the brochure. “Just two short hours from Los Angeles,” it continues. Actually, that can be five very long hours if you leave on a Friday any time after midday, and the I-10 highway could win awards for its mind-numbing ugliness, finally plunging you into a gigantic wind farm after miles of dust and concrete. We were tired and tetchy by the time we arrived… but that very quickly changed.

Our hotel – the Parker – cosseted us from the moment we found its remarkably discreet entrance, just off East Palm Canyon Drive. You can tell a lot from a hotel lobby, and this one, with its faux zebra-skin rugs, suits of armour guarding the lavatories, open fires and brightly coloured artworks, promised eclectic luxury and charm. The receptionist, the concierge – all the staff, in fact – were genuinely welcoming… not just putting it on for a tip.

The hotel’s real glory is its garden with shrubbery, flowers and lawns that simply shouldn’t exist in the middle of a desert. It’s a garden full of secrets and surprises: two swimming pools, bonfires where you can sit and watch the stars, wedding chapels, croquet lawns, table tennis, boules, an old-fashioned lemonade stand and 13 acres of loveliness. There’s a palatial spa with another swimming pool, a Jacuzzi and so on. I’ll be honest, though, and say that I was a bit let down by my room, which was spacious but functional rather than fantastical, and I wasn’t crazy about the view of the laundry baskets. My advice would be to make sure you’re on the ground floor, or better still go for one of the well-appointed villas hidden away in the gardens. They’ll make you feel like a multimillionaire celebrity – although, if you can afford them, quite probably you are one.

The Parker has two restaurants. In the rather chilly, dark “fine dining room”, the wine is divided into “crazy”, “sexy” and “cool” and you could say much the same about the clientele. In this place, even the dogs are chic – and there are quite a few of them, as the hotel allows animals. Breakfast, served on the outdoor patio of Norma’s, is unbelievably delicious. Can I recommend the “Zillion Dollar Lobster Frittata” with 10oz of Sevruga caviar at just $1,000 (£603)? Well, no I can’t. I didn’t dare try loading it on to The Telegraph’s credit card.

The truth is, we could have spent the entire weekend lounging by the pool, surrounded by palm trees and mountains (although, in truth, both pools are a touch too small for the number of guests). But we were keen to explore Palm Springs itself and set out – first for breakfast at Cheeky’s, where the 30-minute wait for a table seems to be a much-loved local ritual. It was an OK breakfast. Then we drove around the town in our open-top Mustang, channelling Frank Sinatra and all the other Rat Packers whose spirit still imbues the place. We even cruised past a few homes of the stars: Marilyn Monroe’s house, enchanting; Liberace’s as kitsch as you would expect. 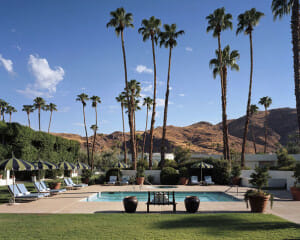 The architecture in Palm Springs is extraordinary. Many of the houses are built in the midcentury modern style – soft colours and sharp angles. One of the pleasures of this place is that nothing is taller than the palm trees that become the true stars of the town… no two are the same. And all the time you’re reminded that it’s ridiculous. It’s like being on the set of a sci-fi movie. The San Jacinto Mountains loom over, more arid than any mountains I’ve ever seen. You take a beautiful road past beautiful houses but suddenly it stops at a great wall of boulders with nothing beyond and there are strange, empty spaces between the buildings where nothing has been constructed and nothing grows. It’s as if the desert is in conflict with the town, forever whispering: “You shouldn’t be here. This bit is mine.”

We visited the Palm Springs modern art museum – another superbly designed building – and were astonished by the quality of art on display in the air-conditioned spaces (it’s cool in every sense), with works by Picasso, Degas, Matisse, Henry Moore, Anish Kapoor and a terrific Antony Gormley. We travelled up on the aerial tramway, an experience in itself. A masterpiece of Swiss engineering, the floor rotates as you climb a sheer rock wall to a height of almost 11,000ft. Once you reach the top, there are some truly lovely hiking trails, a chance to spot raccoons and coyote and, best of all, a cool escape from the desert heat, which can be well over 100F (38C) before you even reach the summer months.

We shopped and we ate. Palm Springs boasts dozens of art and antique shops that actually have stuff you might want to buy (and prices that are surprisingly affordable). And as for the restaurants! I would recommend the distinctly retro Bernie’s Supper Club, with its live jazz and lava lamps. Or the wonderful Tropicale, a popular haunt for the gay community but open to all and serving excellent food under the stars. Finally, you can’t leave Palm Springs without trying Pinocchio, a famous institution that’s as much funfair as restaurant with its balloons and stuffed toys, and which is famous for its bottomless mimosa… cheap champagne and orange juice that never stops coming.

We stayed three days and something quite remarkable happened. We did no work. I didn’t write a word. My wife’s iPad remained shut. There was something about that dry desert heat that made us feel utterly relaxed, happy, indolent. No wonder Los Angeles hotshots come here in their droves. If ever a resort was designed to turn off and recharge the batteries, this is it.

And on the Monday we met Herman Wouk. He greeted us from behind his desk, where he was working on his latest novel, and began an inquisition that showed how carefully he had checked us out before we arrived. But this is the remarkable thing. In a few days’ time he was going to be 99 years old! That too must surely be a good advertisement for whatever they put in the air and water of Palm Springs.

We spent two hours with him and I was as happy as I could be, meeting a literary hero. It was only two days after we got back to London that we received a message from his lawyer – yes, he was willing to work with us. It’s wonderful news. The possibility of a superb TV series and, with a bit of luck, an excuse to go back.