Coachella Fest from a “Coachella Vet”!

Growing up in the Coachella Valley, I have always held the famous Coachella Valley Music and Arts Festival close to my heart. Having gone a previous 8 times, I’d consider myself a “Coachella Vet.” I accept Coachella Fest as my yearly escape, fully embodying the culture and embracing the art. Leading into the 2016 festival, I feel more ready then ever.  Being a huge “hiphop head”, I love the current lineup and having, recently, moved outside the desert… I was excited for the homecoming feeling and the thought of joining thousands of visitors celebrating the beautiful Coachella Valley. 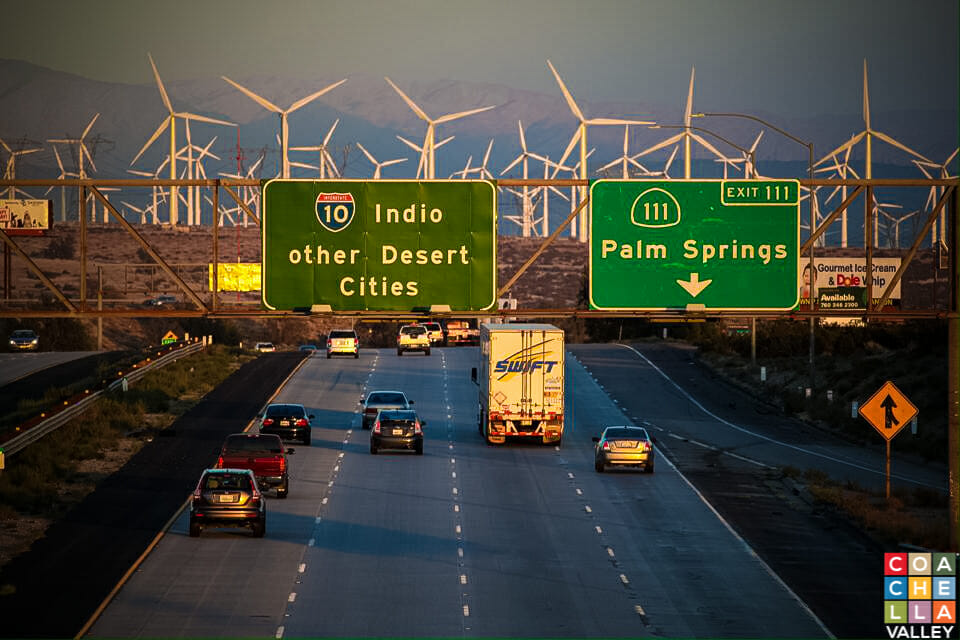 I have always held the famous Coachella Valley Music and Arts Festival close to my heart.

Arriving early with some of my friends, we get there around 10, (the gates don’t open until 11). It’s time for our annual Pre-Coachella tailgating. We play music outside our cars, pound down food and drinks (crucial for surviving the long day ahead) and, of course, discuss our game plan going in the festival grounds. We decide to check out the art first. None of us have any crucial artists to see until Joey Bada$$ at 3:30, so we figured we might as well get our “very important” Instagram photos taken while the crowds small and the lighting perfect.

Scanning the Polo fields in search of art/photo ops, it’s instantly apparent that there’s something missing. They’re missing a float! The mobile art that Coachella enthusiasts have grown to love and expect, is nowhere to be seen this year. Previously, we had seen the mobile art in the form of an astronaut, the snail, and who could forget, the loveable caterpillar that amazed us all as it transformed into a butterfly on the final day. The floats at Coachella have become a staple on the festival grounds and this year’s void is definitely felt, and a big conversation point over the weekend. 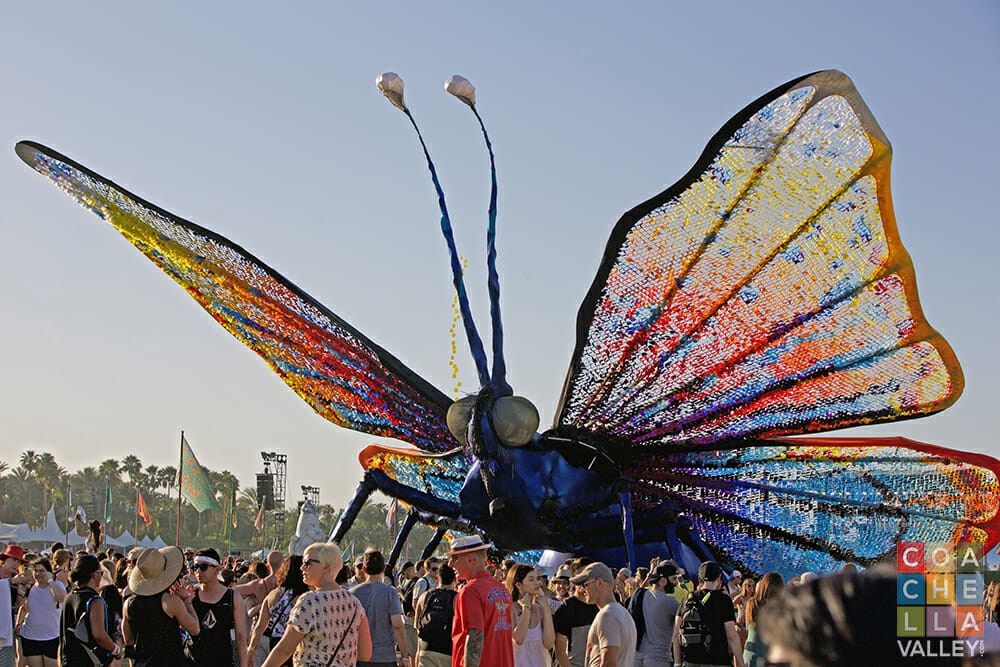 The mobile art that Coachella enthusiasts have grown to love and expect, is nowhere to be seen this year.

When it comes to photo ops, the main focus, this year, seems to be the giant flower-coated text “Besame Mucho”… Spanish for “Kiss me a lot”, causing a frenzy of Instagram-ready lovebirds. My girlfriend and I chose to pass up on the trend. Instead, we enjoyed the taking photos with the cleverly designed recycling bins that look awesome and promote recycling! I especially enjoyed the bin dedicated to welcoming the Rams football organization back to LA.

It’s always fun in between sets to check out the different sponsored tents featured at the Festival. This year’s H&M tent proved to be a nice hangout spot with cool air conditioning, fresh water (for those avoiding the dreadful refill station line), and a fun high-resolution video your group can partake in as your movements start to digitalize on screen. Our group loved making the video at the tent and it made for a great souvenir as they send you the video via email.

A real standout tent on the festival grounds is the Heineken House. The beer sponsored tent features lesser known DJ’s but offers a cool and refreshing dance area that is much more spacious then you will ever hope to find in the Sahara tent. Of course, the major benefit of being in the Heineken House is the availability to drink while enjoying the music and social life at Coachella. My, personal, favorite thing about the tent is the photographer going around taking polaroid photos of you and your friends leaving you with a nice memory to take home.

The large variety of food at Coachella is always a spectacle in itself. While my friends were more experimental with their choices, I chose to stay in my comfort zone and ate fried chicken and fries… all three days. However, it wasn’t just any fried chicken, it was, in fact, a local favorite of mine, “Murph’s Gaslight” fried chicken. One of the perks of growing up in this valley is knowing about the local food options. Murph’s fried chicken has kept to the same standards that you’d expect eating at their restaurant and certainly made me feel at home. While I was busy with my chicken, my friends enjoyed Tamales, Strictly Vegan, Pad Thai Noodles as well as festival-favorite Spicy Pie over the course of the weekend. It was a goal of mine to try the ever-popular Afters Ice-Cream and it, certainly, did not disappoint. The handcrafted ice cream flavor (I chose “cookie monster”) in the center of their warm Milky Bun (essentially a donut) was a memorable experience and a “must try” for any attending Weekend 2. 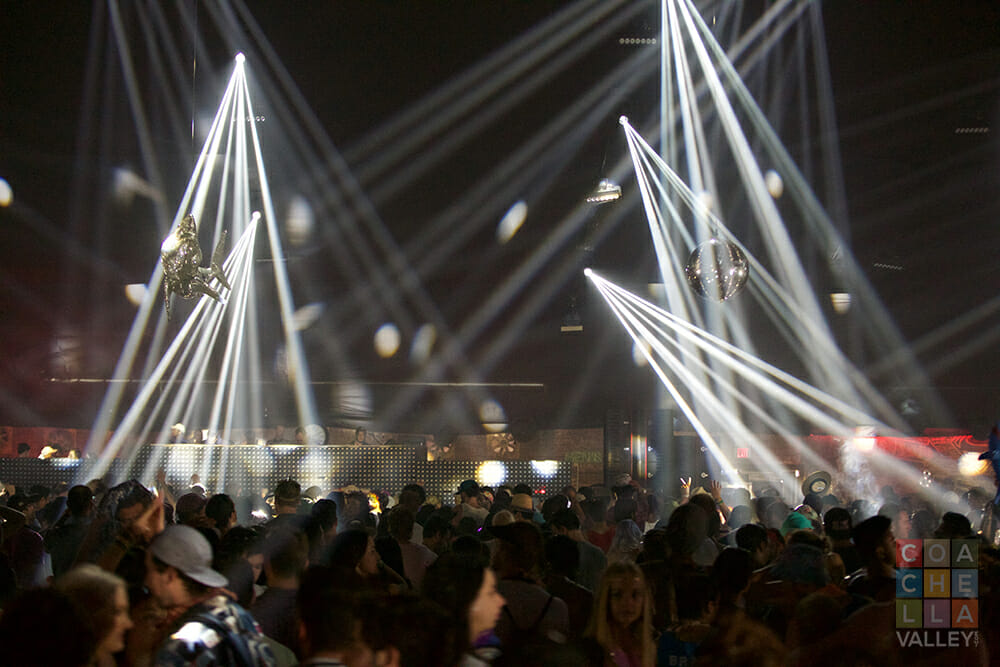 Heineken House – DJ’s offers a cool and refreshing dance area that is much more spacious then you will ever hope to find in the Sahara tent.

I filled most of my time up during the three days making sure I was catching as many artists perform as I could. I must have seen, somewhere, between 30-50 performers over the course of the weekend, however, I found my amusement in the sets that were less DJ focused and saw more artistry on stage.

As my weekend came to a close, it ended upon a high note. I revisited some of my old food haunts, sampled some new music, and leave the festival truly spent. I say my goodbye to the Coachella Valley I was raised in… ready to go back to my life away from the live music, away from the crowds, and away from brutal heat. That is until next year when I’m, extremely, eager to do it all over again.

As my weekend came to a close, it ended upon a high note. I revisited some of my old food haunts, sampled some new music, and leave the festival truly spent.