Chase is what happened!

Dead Woman is over $99 Billion Dollars in DEBT according to CHASE Bank. This Video shows this is no joke. CoachellaValley.com Exclusive.A friend of the Coachella Valley Team woke up yesterday to find his mother (who recently passed away) over $99 BILLION Dollars in Debt. Even so Chase says she still has over $400 more in her account to spend?

In addition to the the Video [1]we’ve included the Alert email notifying that her $50 low balance threshold had been reached. A second email goes on to explain the account is overdrawn and that her current balance balance is CURRENTLY $99,999,999,561.19 in the hole this afternoon. 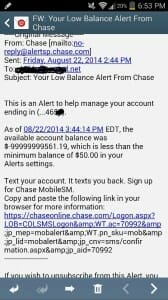 A call to CHASE Bank Customer Service led to a conversation where the CHASE representative said “I can’t do anything about it” and then suggested “You should go into a branch on Monday or at your earliest convenience and let them know”. Sad thing is the account actually has money that is needed to cover final expenses among outstanding bills. The rep did not escalate the issue or even suggest another alternative. Crazy right?

You would think CHASE would want to know that one of their recently deceased customer owes them $99 BILLION DOLLARS, sooner rather than later. And what about expediting helping our distraught friend to resolve the apparent glitch sooner rather than later to allow the remaining funds to be withdrawn to cover final funeral costs?

The CHASE Bank rep went on to say “it looks like a computer error”.

DO YOU THINK? CHASE’s Ink Card slogan is “CHASE WHAT HAPPENS” Maybe it needs to be modified to “CHASE. WHAT HAPPENED??”

If it’s true we know which bank we are going to apply for a line of credit next. Ummm a $BILLION dollar line of credit. For more information regarding this story please contact media@coachellavalley.com.