What are your thoughts about Cathedral City’s new proposal to build a $3 million festival corridor to bring concerts and wellness parks to Civic Center?

The planned festival corridor near City Hall could be the shot in the arm the city’s district on Highway 111 needs. 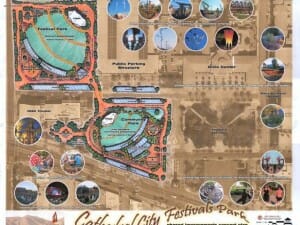 The six-phase Festival Park project would turn two vacant lots, about 3 acres total, next to the UltraMax theater — formerly Desert IMAX — into parks.

The parks would feature two amphitheaters with stages, an outdoor art gallery, multi-use health and wellness trails and water and energy conservation exhibits.

One would face East Palm Canyon Drive (Hwy 111) and the other is along Cathedral Canyon Drive.

The city plans to apply for grants through the Desert Healthcare District and water agencies and possibly crowd-funding to help pay for the improvements, but won’t pursue either before the state’s OK.

Grant applications wouldn’t be taken seriously until the land’s owner is decided, she added.

Preparation including a conceptual design, are underway to be able to move forward as fast as possible when state approval comes.

The town square, including the vacant lots, are already home to Shorty’s Rib Fest and the Arts, Music, Films and More — AMFM — and other festivals and events.

The city’s town square and adjacent areas have proven over the years to be successful for community gatherings, concerts and special events,

Do you think this will benefit the surrounding business community and engage residents of Cathedral City, and the valley, at large?