Much of the significant damage caused by a 6.1-magnitude earthquake that struck near Napa Sunday could have been prevented, US Geological Survey seismologist Lucy Jones said Sunday.

The earthquake occurred at 3:20 a.m. Sunday around 6 miles southwest of Napa and resulted in 89 injuries and left three in critical condition. It is the largest earthquake to shake the Bay Area since the 6.9-magnitude Loma Prieta quake in 1989, according to the USGS. 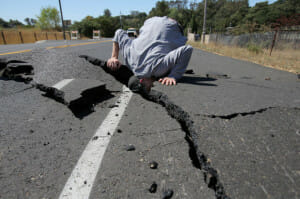 “This is the sort of earthquake we expect to happen in California,” Jones, who is normally based at Caltech and is also Los Angeles Mayor Eric Garcetti’s science advisor for seismic safety, said. “It’s a magnitude 6.1. It happens somewhere in the state on average once every few years. When they happen near people, we get damage. The damage that I’m seeing is completely predictable and could have been preventable but we haven’t as a society chosen to do that.”

In addition, fires in mobile home parks happen after just about every large earthquake, as they did in the Napa quake, because gas lines moving into mobile homes get shifted off their foundations. Jones said she has seen a mobile home park in the Coachella Valley where the homes are put in a slight depression rather than on stilts so they don’t shift during an earthquake.

Broken water mains also can be prevented by replacing pipes with new ones specifically designed not to rupture during earthquakes. However, to replace all of them is “a pretty expensive proposition” and in Los Angeles alone, would take up to 300 years because of the city’s pipe replacement schedule, she said.

Overall, the state of California has done “a very good job” relatively speaking to reducing injuries as a result of quakes. A 6.0-magnitude earthquake in an inhabited area would historically kill people, such as the 6.4-magnitude Long Beach earthquake in 1933 that caused 120 deaths. Yet there have so far been no reported deaths in Sunday’s Napa quake, she said.

In a very large earthquake, “the economic consequences can be such that can put us in a depression,” she said. The highest probability is that damage from Sunday’s temblor will be between $100 million and a billion dollars, according to initial estimates, Jones said.

Jones is planning to release a major report in October that will tackle how to better protect the city of Los Angeles’ buildings, water and communication systems in the event of a major earthquake, she said.

The Associated Press contributed to this story.