Are Rattlesnakes in the Coachella Valley Out of Hibernation? 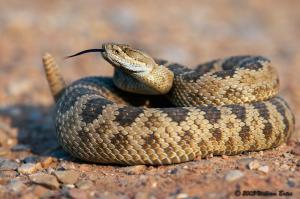 Here are some quick Do’s and Don’ts from Wildlife.ca.gov[2]:

As Jill explained, “I decided to take a small hike to get some photography time. I didn’t want to go far from my home in Palm Springs Sunday afternoon, but wanted to be far from crowds. Mike [Jills Husband] and I decided to travel near the Snow Creek area. We took a dirt road out into desert then parked the jeep and I started my hike (not on any trails ), and I felt safe thinking that the rattlers were in Hibernation (because there my main concern when out exploring during rattler season). I just walked freely through the desert not really being careful. Finally, after taking a few photos of the landscape, I decided to go back to jeep. I decided to take a shortcut and headed down a rocky canyon. I jumped down off a rock and when I hit the ground I instantly heard a sound that sent shivers down my back. It was loud, I must have scared the snake and he sure scared me! I jumped back up that rock so fast and screamed out to Mike. The adrenaline took over my body, so when I recovered from the scare I found a safe spot to video and photograph the snake.  I was extremely lucky that I did not get bit. Thankfully, the snake put on quite a show for me for about 5 minutes”.

Here’s the video following her initial encounter with the snake:

In Jill’s case, it seems that she stumbled upon a space in which a rattlesnake claimed as its own during its brumation period. While inactive the snake still remains alert to its surroundings. As Jill stated on her Facebook following her encounter, “Yesterday, while out hiking in Palm Springs area, we came across this rattlesnake and it was a close call for me. I didn’t see the rattler until I was right next to him and he then started to aggressively rattle at me”. As you can see in the video, this rattlesnake was pretty intimidating, and has many questioning why the snake is out in the middle of winter. I was quick to also ask that same question, but after some research I have come to the conclusion that Jill Hayes simply stumbled upon a lethargic snake that was startled when it heard her hiking through his territory. After watching the video we can see that the snake is coiled up between two rocks and does not scurry away.