Anarchy and Ink – Ink It!

Nestled at the foot of the Ramon Road Bridge, right at the border of Cathedral City and Palm Springs is a little tattoo shop with a big heart. Owned and operated by Camren Camtastic Fuhere, this well-established branch of his two phenomenal shops has a reputation for being the best in the valley. After speaking with the owner, and the four artists who work here, I can see why! 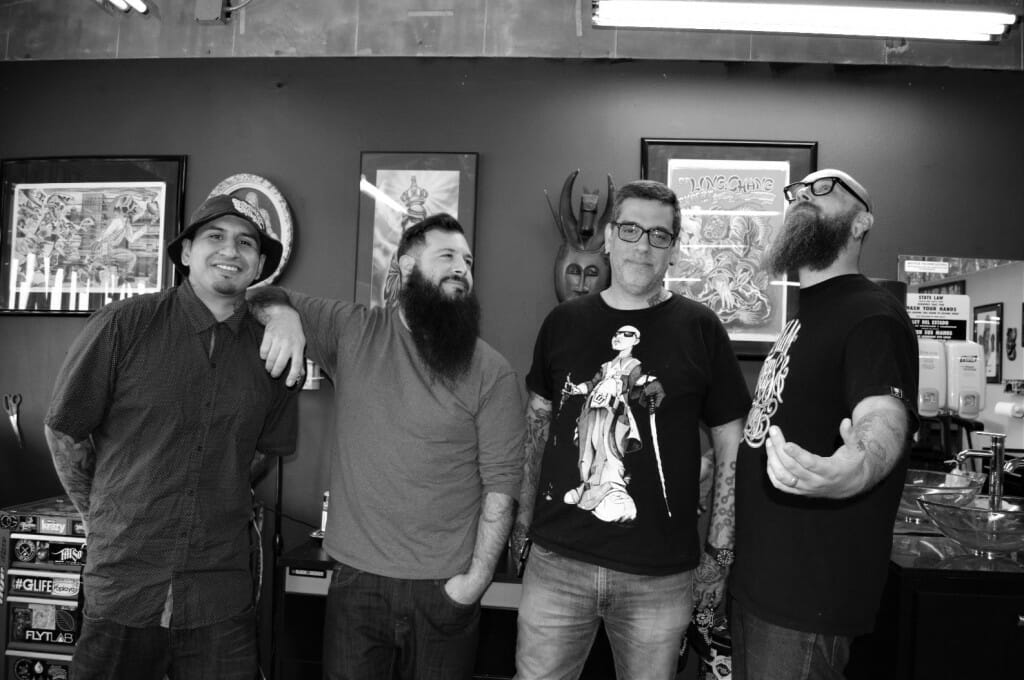 Anarchy and Ink was the brainchild of Cameron Camtastic Fuhere, 50, an artist who is world-traveled and world famous. He has been tattooing for 32 years. At one time, Cam owned five tattoo shops, including one in Costa Rica. His work and achievements have been featured on the Discovery Channel and Ripley’s Believe It or Not. In a June 22, 2007 article for the Cathedral City Sun, Cam said, “[The tattoos] mean something deeper than [art]. It’s a sign that you’re owning yourself. You’re putting what’s on the inside of you on the outside. It says, ‘Yes, I feel, Yes, I’m alive, and I can make my own decisions.’” Cam opened his shop in Cathedral City in 2005 because there were customers and artists at the time who did not want to commute to Los Angeles, San Diego or Orange County to get the best tattoos. “There was a need for world-class tattooing in this whole eastern block of Southern California.” In addition, Cam has studied extensively with skin pathologists to learn more about what is underneath the skin they’re working on. This is evident in the quality of cover-up tattoos not only for oopsies from the past, but also for scars related to burns, old injuries and plastic surgery. Cam currently has two shops operating under the Anarchy moniker, one in Cathedral City, and one in Twentynine Palms. Cam revealed to me that he is also set to open the WARDOGS Ink Bar and Vape Lounge near the Twentynine Palms Marine Base in late July of this year. Cam and his shop artists will be represented at The 3rd Annual Palm Trees and Tattoos Convention at the Hard Rock Hotel in Palm Springs, July 8 – 10.

Artist Fernando Picazo is the young blood of the shop. At 28 years old, he already has eight years’ experience with the craft. He began his tattoo career apprenticing under Wyatt Johnson, who also works here at Anarchy and Ink. Fernie was born right here in Palm Springs, California. He took a brief hiatus in Florida in 2012 and did what he calls a working vacation at Honky Tonk Saloon in Key West. In 2014, Fernie tried his hand at two different tattoo shops in Arizona, Alley Cat, a biker-style shop in Glendale, Arizona, and Fine Art, a Latino-style shop in Phoenix. Fernie said, “My return to Anarchy is because I feel it is more welcoming, friendly, sanitary, and attentive than many of the other shops I have worked in.” Fernie adds that he received some collegiate awards for art prior to his tattoo apprenticeship, which has surely given him a leg-up on initial design and application of the artwork he creates. 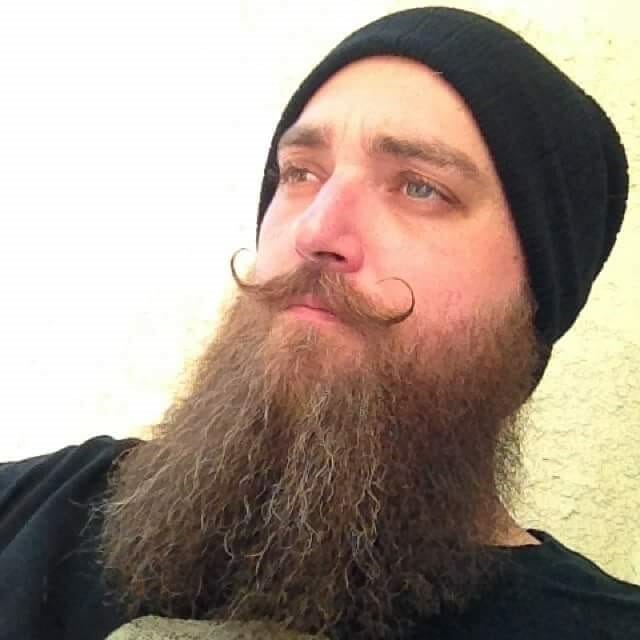 Artist Brendan Mark Maloney has come the farthest, at least in distance. Born a navy brat in Kenagawa Ken Yokuska, Japan, He began his tattoo career at New Moon Tattoo in Venice, California. Around 2015, Mark, as he likes to be called, said, “I began looking for a shop that I would like to get tattooed in. I found Anarchy.” Mark adds, “I want customers to know where we are. The tattoos speak for themselves, as does the artwork and integrity. Everything else comes out in the wash.” Mark has created quite a portfolio of non-tattoo related art which he says, “Wraps itself back into tattooing.” Mark was also a musician in what he calls the old desert scene, and has produced soundtracks for movies and television.

Wyatt Johnson, originally from Berkeley, California, apprenticed at the Anarchy and Ink in Cathedral City with Cam back in 2006. “I am an original, from the old days when the shop first opened,” he says, happily. Wyatt is also an acrylic painting artist with awards from the Rotary Club, the La Quinta Arts Foundation, and even has a painting entitled Mr. Coffee on permanent display at the Palm Springs Art Museum. Wyatt has been a featured artist at both of the Palm Trees and Tattoos Conventions in Palm Springs, and is slated to be there this year as well. Wyatt was also a featured artist at the recent Ink Mayhem exhibition in Laughlin, Nevada. He was a featured artist more than once at the annual Ink-N-Iron Kustom Culture Festival at the Queen Mary in Long Beach, California. “We have one of the longest and best reputations in the desert,” says Wyatt about Anarchy. “We have to jump through a lot of hoops to meet the stringent demands of the Riverside County Department of Environmental Health, but we are happy to do so, because we run a clean shop.” 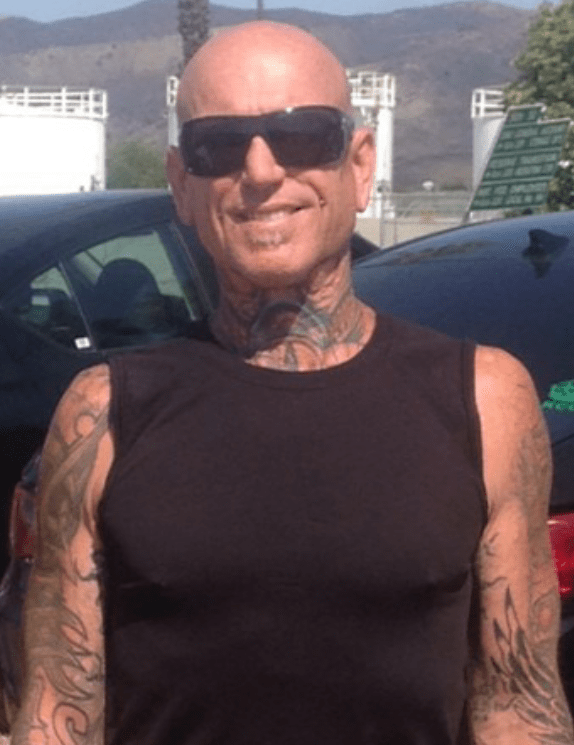 Steven Rosewood is originally from Anaheim, California. He began tattooing in 2006. He tells the story, “I guess you can say, I’m self-taught. I started out just doing my own thing.” In 2007, he landed a position at 111Tattoo in Palm Desert, California. In 2009, he went to work for Anarchy and Ink in Cathedral City. From 2010 – 2013, He worked for Cactus Tattoo, also in Cathedral City. After a brief time away from the tattoo scene, he was invited by Cam and Wyatt to return to Anarchy in 2015, and has been back there ever since. Steve says Anarchy is, “…not just your average shop. We all do excellent work. We are versatile, and this sets us apart from everyone else.” In addition to being a tattoo artist at Anarchy, Steve is also an oil painting artist. His works have been featured in exhibitions, at the 2015 Palm Trees and Tattoos Convention in Palm Springs, and he even won first place for one of his paintings at the 2014 National Date Festival in Indio, California. Steve has also taken up the task of promoting the shop on social media. Prior to his arrival in 2015, Anarchy was promoted mostly by word of mouth and business cards. Now they can be found on Facebook, Instagram, and other social media platforms.

If you’re interested in booking a seat with one of these world-class artists, come in for a consultation at: 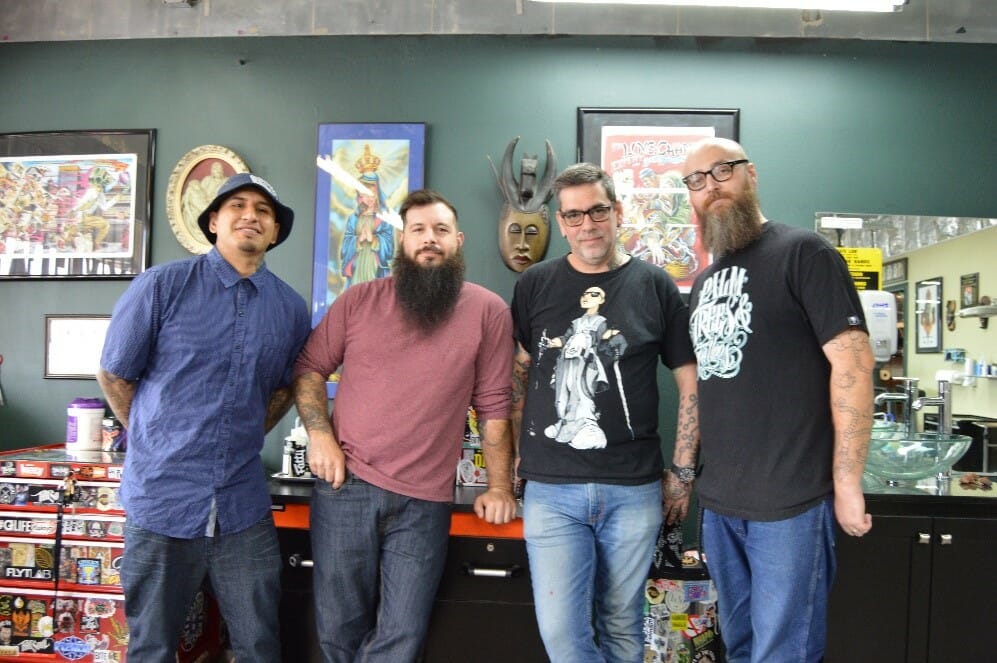 Artists Fernie, Wyatt, Mark and Steve – at your service

In the high desert, check them out at: