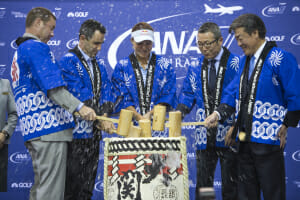 ANA Inspiration, the LPGA’s most iconic major championship and the first of the 2015 season, today unveiled a fresh new design to the legendary champion’s robe in partnership with title sponsor ANA, a global leading airline and Japan’s Imabari Towel brand.

At this year’s ANA Inspiration, the new robe will be presented to the tournament winner after her traditional jump into Poppie’s Pond before the official trophy presentation – coming on Sunday, April 5, 2015.  The new robe was officially unveiled today at an LPGA press conference featuring 2014 champion Lexi Thompson and LPGA Commissioner Mike Whan, alongside Takashi Shiki, Executive Vice President, Marketing & Sales, CS & Products Services at All Nippon Airways.

Known as the ‘Inspiration of Japan’, All Nippon Airways (ANA), Japan’s largest carrier offers the most convenient connections between North America, Japan and Asia and is recognized around the world for its award-winning hospitality, dedication to personal service, innovative products and commitment to excellence.

Guided by the same meticulous attention to detail as found onboard, ANA were inspired by the tournament’s sense of history and tradition to produce an upgraded robe ‘fitting for the new champion’ in partnership with the renowned Imabari Towel brand – a Japanese trademark symbol of the highest quality.

“To jump into poppies pond has always been a dream of mine so to put on the Champion’s robe last year meant the world to me. It was always something I saw myself do, I visualized it and to now see the upgraded ANA Inspiration Champion’s robe is incredible. This tournament has just been upgraded by ANA so hopefully I’ll find out what the new robe feels like on Sunday!” said defending Champion Lexi Thompson.

“Once we heard ANA was coming into sponsor this tournament it was such a relief. This is such an amazing event with the history and the tradition and to now partner with ANA will keep it strong and keep the tournament upgrading with our traditions. I’ve always looked up to the champions here. They’ve inspired me and hopefully I can keep that tradition going and inspire others.” 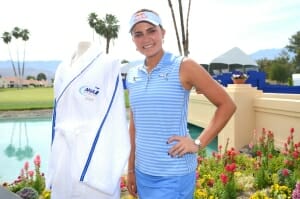 The robe is pure white, preserving the legacy of the tournament and inspired by ANA’s recently introduced flight attendant uniforms – featuring ANA blue stripes on the sleeves and emblazoned with the ANA Inspiration tournament logo.  Imabari Towels are known for their world-class absorbency and the stunning Imabari city, Shikoku Island in Ehime Prefecture has more than 120 years history of producing towels by combining traditional craftsmanship with cutting-edge technology.

“ANA is very excited and humbled to partner this wonderful championship. To be associated with its unique history and tradition is a true honor for our organization. We respect and value all that this event represents as the leading event in ladies golf worldwide and we hope even more people can be inspired by the golf on display this week”, said Takashi Shiki, Executive Vice President, Marketing & Sales, CS & Products Services at All Nippon Airways.

“The champions robe is one of golf’s most iconic symbols. We wanted to follow with tradition but start a new era with a new look by creating the finest luxury robe in the world for the finest golfer of the championship. This led us to our homeland and Japan’s Imabari Towel who share the same values for quality products and service as we do in the skies. We cannot wait for our journey to begin and look forward to seeing our champion golf proudly wearing the new ANA Inspiration champion’s robe on Sunday and in the years to come.”

“The robe is one of the great traditions in women’s golf.  Players think about wearing it the minute they become a part of the LPGA and this takes it to another level.   With ANA’s partnership, I look forward to seeing someone slip on the ANA Inspiration Robe and forever change their place in women’s golf history”, said LPGA Commissioner Michael Whan.

In November 2014, ANA, Japan’s leading airline, announced its partnership with the LPGA to become the title sponsor of the first major of the LPGA season as well as becoming the Official Airline of the LPGA. The theme of inspiration has served as the platform for this tournament and ANA is looking forward to reaching a global audience with the ANA Inspiration while maintaining the long-standing traditions of the championship.

In addition to the champion’s robe, all ANA Inspiration players will receive commemorative Imabari towels.

To see the creation of the new robe please view here – https://youtu.be/UDkNZYm5TYo

For more information about the ANA Inspiration, visit www.anainspiration.com.